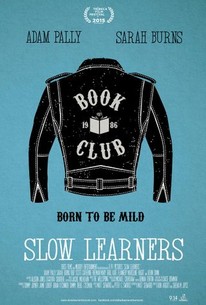 Jeff and Anne, two close friends and co-workers who are embarrassingly unlucky at love, hatch a plan to transform themselves over the course of a sex-and-alcohol-fueled summer. (C) Tribeca

Cecily Strong
as Amber the Ex

Chase Bowman
as Guy at Door #1

David Beaver
as Guy at Door #2

Matthew Andrews
as Guy at Door #3

Gary Ayash
as Teacher in Car

While it's true that many of the scenes would be hard to perform without breaking into laughter, it's often difficult to share in the mirth. Call it hermetically sealed humor.

A satirical romantic comedy that gets mixed grades in the laughter department.

Even if this movie isn't fresh, it's often amusing.

Only a few scenes fail to draw laughs in a movie that's unexpectedly smart and consistently amusing.

Cute and funny, and certainly worth Netflixing, especially on Valentine's Day.

Although it is difficult to believe that the people on screen would actually do the things they do, the movie is undeniably funny.

It's amusing by any standard - the offbeat story of two nerdy lonelyhearts who decide to spend a summer on the wild side.

This is an indie rom-com that, sadly, adheres too much mainstream rom-com tropes. I don't wanna say that there was potential here for this movie to be anything special or unique, but there's some potential here for the film to end up being more than what it is. Two dorky best friends decide to get makeovers and change their personalities so their love lives would have more favorable results. You can tell how this is gonna go, right? If you guessed that their personality changes leads to Jeff and Anne changing into people they'd never be, for the worse, and that would lead to some strife between them then you were right and you get a cookie. Don't get me wrong though, honestly, even with the fact that I think it adheres too much to an established formula, though the ending is pretty cute in not playing to the happy, sentimental stuff you're used to, I legitimately enjoyed this movie quite a bit. Sarah Burns and Adam Pally, Anne and Jeff respectively, duh, are really, really good in this film. Adam Pally has done a lot of TV work but I was completely unfamiliar with Sarah Burns and she's definitely a very talented comedic actress. She, physically, reminds me of Kristen Wiig and Cheryl Hines. But she's also really good at what she does, so she was definitely a welcome surprise. I'm fairly certain I've seen Adam Pally somewhere, but I can't really place him, but he's also real good and he makes a good pair with Sarah. They're likable enough, but the film doesn't really have that much depth. I'm not saying the characters are one-dimensional, I think they're a little more developed than that, but it's not like we're watching the most accurate representation of modern romance, so I guess I can't really complain. This film was meant to entertain and that it did. I still have a lot of problems with it though like, for example, the whole 'Jeff and Anne are now driven apart by their changes' literally came out of nowhere and it was really a little jarring. I felt that they could've eased into it as opposed to just running headfirst into it, which is what they did. It just doesn't come naturally, like there's no tease of tension between the two. And it's honestly a bit silly when Anne knows that the name of the game is get laid as much as possible, so getting upset about Jeff having a regular 'booty call' seemed a little strange. Though, you could also argue that her finally realizing that she was in love with Jeff led to Anne being kind of bitchy to Beth, Jeff's booty call. I do think that the movie, invariable, slows down during this part. It's not that it's terrible or anything, it's just a step down from what the movie previously was. So, pacing-wise, because of that, the movie takes a few stumbles before, naturally, getting back on track at the end. The film has a strong supporting cast and that helps move things along in an agreeable fashion. I just wish this movie felt a little more focused, it kind of loses its way for a while there. I know that sounds redundant, but it bears repeating. So, yes, I had my complaint, but I quite enjoyed this movie. I was in a good mood so I probably enjoyed this more than I would've on any other day. A really good cast helps make up for some flaws in the script. Would recommend it if you have Netflix. This was an absolutely terrible review, so take what I say with a grain of salt.