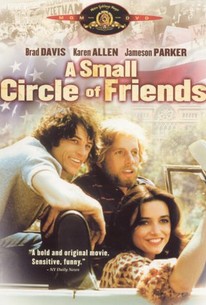 Pumped up with energy to spare in its first half, this is an otherwise routine drama about a love triangle set in the turbulent late '60s on the Harvard campus. Harvard takes a remote backseat though, as Leo (Brad Davis) chases after Jessica (Karen Allen) while buddy Nick (Jameson Parker) also nurses a crush on her. Leo is in journalism, or wants to be, Jessica paints but she is leaning toward law school, and Nick is a solid, steady pre-med student. Their relationship takes a serious turn when Leo's number comes up on the Vietnam draft. Nick makes his feelings known to Jessica and whether it seems like a good idea or not, she suggests that the three of them move in together.

Harry Caesar
as Jimmy the Cook

Brett Smith
as Man Under Car

Amy Leitman
as Student in Library

Critic Reviews for A Small Circle of Friends

That's both the strength and the weakness of this film -- its niceness.

A Small Circle of Friends is confusing, vulgar, and not very interesting. [Full Review in Spanish]

A Small Circle of Friends is a romantic drama set in the Sixties.

There are no featured reviews for A Small Circle of Friends at this time.

A Small Circle of Friends Quotes