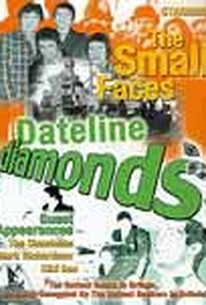 This suspenseful crime drama features cameo appearances by some of Great Britain's more popular pop groups of the mid-1960s as it tells the tale of an ex-crook who finds success managing several of the groups. The trouble begins when a master jewel thief blackmails him into becoming a gem smuggler. Together, they set sail across the Channel to get a fortune in diamonds safely to Amsterdam. They are pursued by two determined detectives. ~ Sandra Brennan, Rovi

The Small Faces
View All

There are no critic reviews yet for Small Faces: Dateline Diamonds. Keep checking Rotten Tomatoes for updates!

There are no featured reviews for Small Faces: Dateline Diamonds at this time.