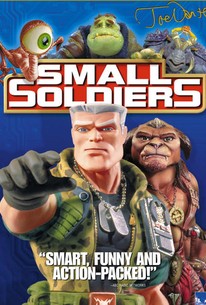 Director Joe Dante and his producer, Steven Spielberg, are reunited for a darkly comic, and ultimately weak knockoff of their magical 1984 creation, "Gremlins."

...this smells like a script slapped together around a toy-product launch.

Though it starts promisingly, the picture ends as a standoff between the affection Dante and company bring to the project and its increasingly frenetic and tiresome emphasis on what special effects can make its little people do.

As absurd as the premise might seem, Small Soldiers works for two primary reasons: the visual effects ... are entirely convincing and the script ... never takes its tongue out of its cheek.

I can't think of a Hollywood entertainment I've enjoyed as much all year, and both audiences I saw the movie with seemed delighted as well.

What bothered me most about Small Soldiers is that it didn't tell me where to stand--what attitude to adopt.

Stan Winston's miniature and CGI effects are wonderful, but they can't conceal an obviously weak script in what is unfortunately a footnote to Dante's better work.

Small Soldiers deserves to be re-evaluated, which fortunately also means that it can finally be enjoyed, too.

Works as an adventure film and another fine Joe Dante creature feature...

An infomercial with the schmaltz that passes for emotion in family-aimed films.

It looks like the movie was edited down from a much meaner version, to our loss.

I saw this when it first came out in the cinema way way back in good old 1998, the air was cleaner back then. *Cough!* sorry!...anyway I didn't really like it as I recall, it was hyped up pretty strongly but didn't really live it up to it. Surprise surprise on a re-watch I have done a 180 and now do appreciate the film a whole lot more, I guess I didn't quite get the tone first time round. Set in small town USA two sets of brand spanking new hi-tec toys are due for release but a small batch get an early chance of sales in a local toy shop. The shop is run by a humble man who has a slightly rebellious son, naturally this lad gets into some small fry high jinx (that builds) with these toys as they break loose and run amok. One set of toys are the good guys and one set are supposedly the bad guys, one group has been programmed to destroy the other and the local family is slap bang in the middle. Basically this is a modern remake of 'Gremlins' and I never even twigged back in the day. The whole premise is pretty much the same albeit in a lighter tone of course, replace monsters with killer toys. Everything is very cliched and pretty stereotypical of small town America, the film is actually a very good little homage to those classic 80's teen flicks that involved monsters/aliens/the supernatural etc...Hell they even cast classic 80's stars Wendy Schaal and Dick Miller, who of course has starred in some perfect examples of typical 80's trashy horror comedies, including 'Gremlins' (that's not trashy by the way). Miller even plays a similar type of role to his 'Gremlins' character, direct homage to the genre right there if you ask me. Had this been made back in the day it probably would have been pretty dark, but lets give credit where credits due, this film is also quite dark. Its not scary and its not bloody of course but there is a nice undercurrent of evil that lurks within these toy soldiers. You would think how can a toy injure me, but give these little guys a big knife or nail gun and all of a sudden you've got a problem. This is how the film works well in my opinion, they don't hold right back with the action, yeah sure most of it is kinda silly, almost cute, but there are some slightly nasty moments where they have successfully tweaked the hairs on the back of your neck. The sadistic knife wielding 'Barbie-ish' girly dolls are a good example of this. The sequences with them involved aren't scary but its certainly heading down eerie street as they scamper around with damage to their faces and no hair. Almost a PG version of 'Chucky'...almost. The toys themselves are a mixed for me. On the one hand the gruff, butch, muscle bound military special elite soldiers are really nicely. Love the cliched cartoonish caricatures of the typical buzz cut 80's macho action man, especially the cigar chomping ones. Not only do they look like a typical dirty dozen team with each member a master in his own field (explosives, communications etc...), but they got Borgnine, Walker, Brown and Kennedy to voice them! awesome much?!. The other two remaining soldiers are voiced by Tommy Lee Jones and Bruce Dern so really its nothing short of sheer brilliance. And again back in the day I didn't even realise. Of course you have to remember that even though these little guys have been deliberately designed to homage their voice actors to a degree (and the action man genre). They are also suppose to be stereotypical action figures within the film, the type of toys that little boys would clearly love, look at their their names...'Brick Bazooka' 'Nick Nitro'. The characters work on two levels of the conventional stereotype. On the other hand the Gorgonites are a very surreal bunch that didn't really fit the style of the film methinks. Their leader 'Archer' is pretty cool looking and sounds epic voiced by Langella but the rest are a crazy ass bunch of monsters that would feel more at home in a Tim Burton fairytale really. I'm not sure why they didn't keep all the Gorgonites the same type of creature as their leader Archer just with different colours or patterns on the fur (go down the Thundercat route). I did like the dark twisted appearance of one or two of them sure, almost a bit 'Evil Dead-ish' if you ask me but they just don't fit this flick. I do recall that a lot of the hype for this film was down to the Stan Winston effects for the toys. To be fair these effects still remain solid today, gotta give kudos to the actual design and creation of all those action figures because they do look great, I'd have one. The CGI is also not too bad these days, its used for the more obvious requirements but blends in well. On the whole they managed to use both real props/models and CGI effectively together instead of just relying on all out computer effects. This film shows me how you change as you get older, when I first saw it I couldn't care a less about it and didn't pick up on half the details. Now I can see clearly what they were trying to do and I think it works pretty well really. Its not anywhere near as good as some of the 80's classics but it can hold it head up high as a decent entry into the comedy horror genre. I say comedy horror with a pinch of salt as its not totally like that, more a watered down kiddie PG version but still good still good.

Major Chip Hazard: If it lacerates or detonates, I want it mobile and I want it lethal.  "The few, the proud, and the small." I hadn't watched Small Soldiers since I was 8 years old, but I found a great deal of enjoyment from this fun and satirical Joe Dante film. The movie obviously doesn't come flaw free. In fact if you wanted to keep count of just how many elements of this movie are flawed; it would be a tough job. The fact is though, that I just don't really care about the flaws. There's too much good stuff going on here, that it overshadows everything that is wrong with it. So, a toy company comes up with a new idea that let's the toys interact. Then they market it around the American heroes killing the enemy aliens. There's a lot of satire going on here especially in that the soldiers are the bad guys. After a neighborhood kid gets his hands on the toys a little early, the battle between the Soldiers and the aliens begins. Dante isn't exactly subtle, but his style works perfectly here. The movie has the same kind of feel that The Burbs had, and both are good films from Dante. The movie is so chaotic and messy, but in the best possible way. The cast brings out the best in the movie as well. We have Kirsten Dunst, Tommy Lee Jones in a voice role, Dennis Leary, Phil Hartman, David Cross, and a variety of other decent to good character actors. Also, I really enjoyed the jokes that were being thrown at us, either direct or subliminal. Dante had a good eye for what he could exploit with this type of plot and I believe he made good use of what he had. You can call the movie stupid, you can call the movie ridiculous, and you can call the movie flat out awful; but I'm going to call it one hell of a fun time. It may not be a masterpiece, but it does exactly what it set out to do. It's entertaining, occasionally funny, and never boring. It's quick moving and appeals to more than just children. It's truly an underrated movie in my opinion.

I remember when I was young and loved this movie. When I watch it now I realized how bad the acting was from the kids and how many racist slers Tommy Lee Jones's toy says. Also, this is an extreamly violent film for a kids film. But with that said, this films special effects were great and it takes good filmmaking to make you care for a bunch of toys. It's no Toy Story, dont get me wrong, but watch it if you havent in a few years.