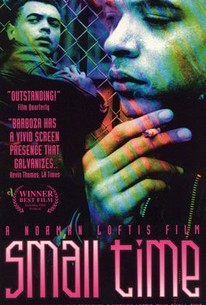 Filmed in black and white on a very low budget, this grim Manhattan-set documentary takes an unflinching look at the realities of inner-city life as it tells the story of how Vince Williams came to become a prison inmate. His story is told via flashback and from those who witnessed his small crime. Born in poverty to a 13-year-old mother, Vince grows up responsible for providing for her and his younger brother. Sometimes he resorts to stealing to keep them fed. Sadly, Vince had a lot of potential and maybe could have done more with his life, but unfortunately, there are few opportunities in the ghetto and his struggle to survive becomes a spiraling cycle of criminal activities, violence and humiliation that only ends with his incarceration.

Kim Anderson
as Woman on Street

Charles A. Coverdale
as Pastor at Billy's Funeral

Sarah Germain
as Woman in Restaurant

Joseph Lovitz
as Old Man Who Gets Mugged

Will Salcedo
as Joe

Randall B. Schein
as Restaurant Manager

Phillipe B. Steele
as Plainclothes Cop

Marian Williams
as Woman Who Fights Back

Roger A. Yaden
as Store Clerk Who Shoots Billy

There are no critic reviews yet for Small Time. Keep checking Rotten Tomatoes for updates!

There are no featured reviews for Small Time at this time.