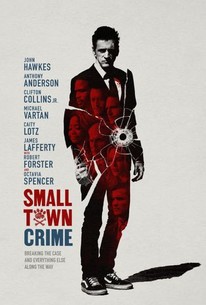 The movie was written and directed by brothers Ian and Eshom Nelms, who must have thumbed through a few Elmore Leonard paperbacks in their day; their movie offers a similar mix of cagey plotting, easygoing character comedy, and punchy violence.

There are enough nice touches and details along the way - including Clifton Collins Jr. as an old school R&B-loving pimp - to make up for its shortcomings.

This is well-made entertainment, pure and simple, with enough surprises along the way to avoid being strictly formulaic. What's more, it accomplishes all this in just under an hour and a half.

Small Town Crime is so engrossing in its optimistic darkness that it screams for the further pulpy adventures of Mike Kendall.

It's the kind of movie that pays heed to the conventions of noir stories while still carving out a space all its own.

A judicious balance between humour and the deadly narrative propelling the film forward ... ensures that the comedy never cheapens or undermines the storyline's impact.

As the body count grows, the film becomes considerably darker, resorting to incongruous sequences of violence that simply don't match the bits of humor that pepper the start.

Through it all, Hawkes is a natural, stretching a scumbag grin a country mile, making his otherwise despicable Mike into an endearing and unlikely hero you're happy to goad on; cheap beer, cheaper hookers and all.

Loaded to the brim with colorful and interesting characters that burst from the page... this is absolutely a crime thriller that could sustain (and would reward) sequels.

Its twists and turns toy with your emotions and despite its largely familiar story conventions, it never comes across as predictable.

Great film and another strong performance by John Hawkes, the indie god. The film is packed with modern noir and it is a grim film populated with a humerous tone, not an easy sell but the filmmakers don't fail for a second. The cast is well rounded and full of surprises, I honestly can't recall when I have seen most of them. Hawkes is the key here and without him the film could have struggled. The film may have struggled to find an audience but if you can find it on Netflix support all these films that struggle to find a release window. Great film and there should be more of them. 18/11/2018.