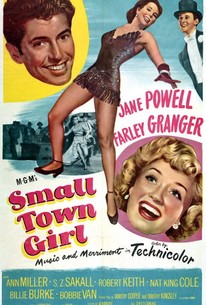 A remake of the 1936 Janet Gaynor vehicle of the same name, Small Town Girl stars Jane Powell in the title role. Powell plays Cindy Kimball, daughter of village judge Gordon Kimball (Robert Keith). When wealthy playboy Rick Livingston (Farley Granger) is arrested for speeding, Judge Kimball sentences the arrogant young sprout to 30 days to teach him a lesson. Taking it upon herself to "reform" the prodigal Rick, Cindy tricks him into marriage, and then the fun begins. Ann Miller co-stars as a musical comedy star with whom Rick had planned to elope; her presence in the film is justified by several well-staged Busby Berkeley dance numbers. Also on hand as Jane Powell's hometown sweetheart is Bobby Van, who performs the film's best and most memorable musical setpiece, "Street Dance," in which Van hops around town like a human pogo stick.

Nat 'King' Cole
as Himself

Jonathan Cott
as Jim the Cop

Marie Blake
as Customer
View All

There are no featured audience reviews yet. Click the link below to see what others say about Small Town Girl!