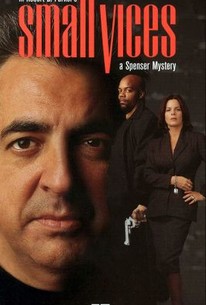 Joe Mantegna stars as Spenser, Robert B. Parker's tough and intelligent private eye, in this made-for-cable mystery thriller. When Ellis Alves (Wood Harris) is accused of the murder of a well-to-do college student, no one seems terribly surprised; Alves has a long criminal record and has served time for two previous felony convictions. But Alves' lawyers notice that many of the facts of the case don't seem to add up, and they hire Spenser to find out if their client is being railroaded. The longer Spenser digs into the murder, the more firmly he's convinced that Alves is not the culprit. But a number of people, including the parents of the murdered co-ed and the police detectives on the case, want Spenser to keep his nose out of the matter, and when someone starts shooting at him, he decides that he may need to go underground to protect his own safety and uncover the truth. Shiek Mahmud-Bey plays Spenser's sidekick Hawk, while Marcia Gay Harden plays Susan Silverman, the detective's significant other. The characters from Parker's Spenser mysteries were also the basis for the popular TV series Spenser For Hire, in which Spenser was played by Robert Urich.

Topaz Hasfal-Schou
as Lila
View All

The rudimentary plot should strain no fan's attention.

There are no featured reviews for Small Vices at this time.