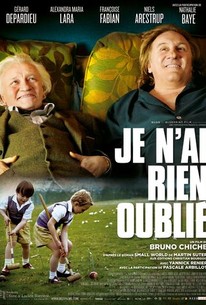 This Franco-German co-production stars two cinematic giants: Gérard Depardieu and Alexandra Maria Lara. Konrad Lang (Depardieu) has spent years maintaining ties with the Senns, a wealthy European clan. Though this association began unassumingly, via his childhood friendship with the family's heir apparent Thomas Senn, later Konrad became the Senn's handyman, much to his delight. Now, as aging Konrad's health and mental state begin to deteriorate; he confides long-buried family secrets in Simone (Lara), a young woman who has married into the dynasty . Konrad's early childhood recollections of family developments that fail to gel with the Senns' official story about what happened, which infuriates and scandalizes the family matriarch, Elvira; as a friendship develops and deepens between Simone and Konrad, Elvira becomes convinced that the cunning handyman is out to destroy the Senn name and legacy.

Feodor Atkine
as Scholler
View All

There are no critic reviews yet for Small World (Je n'ai rien oublié). Keep checking Rotten Tomatoes for updates!

There are no featured reviews for Small World (Je n'ai rien oublié) at this time.