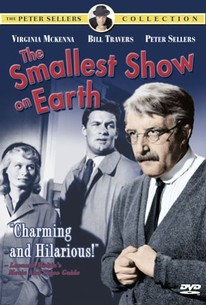 The Smallest Show on Earth Photos

The Smallest Show on Earth is a gentle, frequently uproarious takeoff of Britain's neighborhood-cinema industry. Real-life husband and wife Bill Travers and Virginia McKenna star as Matt and Jean Spencer, a middle-class couple who inherit a decrepit movie house in a tiny railroad whistle stop. They also inherit the theater's ancient, doddering employees: bibulous ticket-taker Percy Quill (Peter Sellers), former silent-movie accompanist Mrs. Fazackalee (Margaret Rutherford) and doorman/janitor old Tom (Bernard Miles). Making the best of things, the Spencers set up shop going through the usual travails of small-time cinema owners: substandard projection and sound reproduction, a dismal selection of films (all they can afford is American B-Westerns), and sundry mishaps with the audience. Just when they're about to write off the theater as a loss, crafty old Tom comes up with an underhanded but effective method to allow the Spencers to make a huge profit on their shaky enterprise. Though chock full of entertaining vignettes, the best and most poignant scene in The Smallest Show on Earth finds the three elderly employees tearfully reveling in a nostalgic screening of the 1924 silent film Comin' Thro' the Rye. ~ Hal Erickson, Rovi

Critic Reviews for The Smallest Show on Earth

The whole weight of this gay idea is carried by Bernard Miles, Margaret Rutherford and Peter Sellers... Outside these three, the film is a rather poor example of conventional British screen comedy, with stock characters and situations.

Very much an ensemble piece, it relies heavily on sight gags and cinema business.

Audience Reviews for The Smallest Show on Earth

There are no featured audience reviews yet. Click the link below to see what others say about The Smallest Show on Earth!

The Smallest Show on Earth Quotes