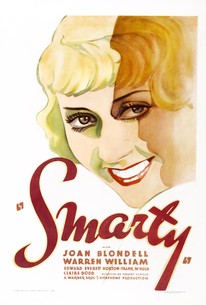 A battling married couple come to blows and afterwards the battered wife seeks legal council. This drama chronicles the events that take place afterwards. Her lawyer immediately suggests she divorce her pugnacious husband. During the proceedings she and the attorney fall in love and afterward marry. Unfortunately, though outwardly gentle, her new husband also smacks her around a bit. Meanwhile, the long-suffering wife secretly still loves her first husband. Eventually they reconcile. ~ Sandra Brennan, Rovi

What a horrible, horrible movie this was. How can I explain it? Well let's see. It's basically wife beating as comedy. The UK name for the film was "Hit Me Again". The main idea is that wife beating is a Good Thing - women want it, and the harder the better, because it shows love. If they get too 'smart' or sassy, the correct thing to do is to hit 'em to keep 'em in line. Joan Blondell is cute and revealing and all (and this movie was still pre-Code), but her character is ditzy and smiles throughout, which is awful in itself. She comes across as shallow, manipulative, and maddening - and everyone agrees, she deserves the abuse. She's never truly shocked or remotely scared, even after getting hit while playing bridge and mentioning that she's also had things thrown at her and been bit. She herself says "a good sock in the eye is something every woman needs, at least once in her life", and "if he really loved me, he would have hit me long ago." Her second husband also hits her after she goads him on with "why don't you hit me like a man?", but he's not as manly so she's less interested in him. When the second husband says "I didn't even hit her hard", a smiling female friend says "Not hard enough probably." Her first husband provides this advice to the second: "I'd kick the door down and kiss her 'til she's black and blue, and if she didn't let me, I'd roll up my sleeves and beat the daylights out of her." These are all real quotes! Oh, and one more, the last line of the movie: "Tony dear, hit me again." - and that, after he's ripped her dress off, pulled her hair, and given her a hard slap across the face, all as she stands there smiling. Did I mention this was a horrible film? Yes, it was a different time and yes it gives us visibility into that, but when it's shown with such lightness and as comedy, not as disturbing or dark, and knowing it's still such a problem in society today, it's very hard to stomach. One of the characters alludes to how men in movies push women around, and specifically the grapefruit incident from "The Public Enemy", as if that's justification for him - but I have to say, while I liked that film, there we knew Cagney was a thug. We saw him commit murders. It's far more painful when it's shown as the norm and done by the "good guys" in the film. This is one to avoid.