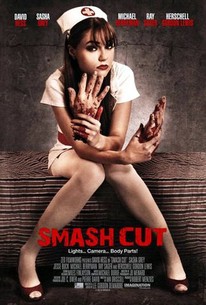 A frustrated horror director decides that the best way to scare an audience is to take a more authentic approach to his craft in this gore-spattered satire starring David Hess, and inspired by the career and filmography of Herschell Gordon Lewis. When the director goes on a murderous rampage and begins using real body parts as props for his latest flick, intrepid reporter April Carson (Sasha Grey) teams with seasoned detective Isaac Beaumonde (Jesse Buck) to stop the slaughter before the film is finished. ~ Jason Buchanan, Rovi

Demabre's self-conscious focus on the z-grade end of the film industry is never quite enough to immunise his film against its own inadequacies.

It's a really surprising film... the funny thing is it is a bad movie on purpose.

An incompetent horror director discovers he can make realistic gore effects by killing his co-workers and using their severed body parts as special effects. This slasher spoof tribute to Herschel Gordon Lewis (who has a cameo) has a few moments of inspiration but is mostly predictable and low on laughs.