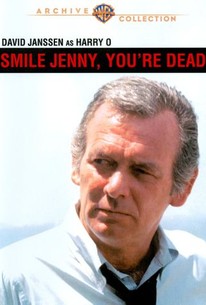 This film for the TV series Harry-O was originally telecast under the title Smile, Jenny, You're Dead. David Janssen plays Harry Orwell, a seedy private eye investigating the murder of his friend's son-in-law. The principal suspect is the victim's wife Jenny (Andrea Marcovicci), a photographer's model. Since this is less a mystery than a suspense story, it isn't unfair to reveal that the real killer is a looney photographer (Zalman King, later a prolific producer of film erotica!), who is in love with Jenny and insanely jealous of anyone who gets in his way. The climax takes place on the roof of a high-rise. Guess what happens. The Harry-O series proper debuted in the fall of 1974, lasting two seasons.

There are no critic reviews yet for Smile, Jenny, You're Dead. Keep checking Rotten Tomatoes for updates!

There are no featured reviews for Smile, Jenny, You're Dead at this time.