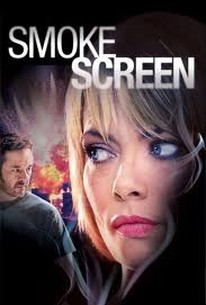 Author Sandra Brown's bestselling tale of political corruption and intrigue comes to the screen in this thriller starring Jaime Pressley. Five years ago, news reporter Britt Shelley (Pressley) solved the mystery of a suspicious fire at a local police station, and her career kicked into overdrive. Little did Britt realize she would soon become an integral part of the case she once helped to crack. When Britt regains conscience next to the corpse of an officer involved in the case and can't recall how she wound up in such a compromising position, however, she races to clear her name and catch the killer. But just when the resourceful reporter thinks she's gotten to the top of the food chain, she learns that the true mastermind may be a big politician with friends in high places. ~ Jason Buchanan, Rovi

Brenda Crichlow
as Sue
View All

There are no critic reviews yet for Smoke Screen. Keep checking Rotten Tomatoes for updates!

Nice twist at the end.

Smoke Screen is pretty good for a Lifeline movie. It is an interesting mystery - not immediately obvious who the mastermind is, and somewhat logical - which is more than one can say for most mysteries.