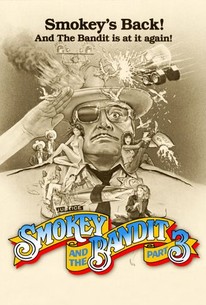 Smokey and the Bandit Part 3 Photos

This is the third and final entry in the car chase saga. This time Sheriff Justice (Jackie Gleason) is tired and getting ready to retire until a brand new Bandit, who was originally Cletus (Jerry Reed)--the truck-driving friend of the original Bandit, appears to bedevil him.

Burt Reynolds
as The Real Bandit

Mike Henry (I)
as Junior

Jackie Davis
as Blackman No. 1

Veronica Gamba
as Girl at Picnic

Timothy Hawkins
as Man in Truck

Pirty Lee Jackson
as Blackman No. 2

Will Knickerbocker
as Hotel Clerk

Critic Reviews for Smokey and the Bandit Part 3

Mr. Reynolds is gone, and whatever was enjoyable about the ''Smokey'' formula went with him.

The sense of fun in that original is missing and the countless smashups and near-misses are orchestrated randomly.

Lowry, Birnbaum, and Dasheu are really unfortunate they weren't making movies 45 years ago; they could have done real well for themselves making two-reel comedies for Joseph Goebbels.

The road scenes are routine. Even the vehicles aren't appealing. In the name of decency, spare us another Smokey.

Gleason remains as funny as ever at the centre of this patchwork of arbitrary mayhem.

This film doesn't even have the basic narrative coherence of the first two, and it rambles about aimlessly with little humor or action. This is commercial filmmaking at its very worst.

Audience Reviews for Smokey and the Bandit Part 3

Why is this sequel called 'Part 3'? beats me, sounds strange really, like an old fashioned tale. Other than that its business as usual for a third time accept for the fact that the Bandit is no longer with us on this road trip. Yep for this third movie Reynolds has flown the coop leaving Gleason to hold the fort on his lonesome. The only other returning cast member is Reed as the old Snowman. The plot once again sees the ultra rich Enos duo offering a wager to (this time) Sheriff Buford T. Justice. The rather pointless aim this time is to transport a large stuffed fish on their car, from Florida to Texas, within the time limit. Why a stuffed fish? well it makes no difference really, its just a stupid visual gag. So Justice accepts the wager and drives off with his dim witted son played again by Mike Henry. The little twist or gimmick in this story is after the Enos duo fail to slow down Buford on his new quest, they attempt to hire the Bandit to help them. But as we know Reynolds isn't in this movie so instead they have to opt for the Snowman for assistance. This entire idea is somewhat tired really it must be said. The original movie was a great slice of hokey, Dixie bound tomfoolery with a cool car. The second was an utter shameless rehash of the first which literately didn't even bother to try and be remotely different, accept for the cargo it was virtually identical. Now with this they have turned the tables and tried a new angle by making Buford the mule, which I must give small kudos too. Alas they still can't escape the lure of the original flicks plot and simply have to make the movie into another big chase sequence. Unfortunately that small element of originality with Buford goes out the window, the reason being the Snowman manages to slow Buford down by stealing the large stuffed fish on his car. Buford needs this stuffed fish to win the wager. Thusly this once again sees Buford on the chase, after the Snowman and the large stuffed fish. The twist concept of Buford being chased doesn't last long I'm afraid. Heck even Cledus the Snowman manages to pick up a female sidekick in virtually the same fashion as the Bandit did way back in the first movie. It appears that these movie characters have requirements, Buford always chases and the protagonist always has a female sidekick...and drives a Trans Am. I don't actually know what Buford is in his police attire for this really, he is on the brink of retirement and once again is completely out of his jurisdiction the whole time. I understand being a police officer in a police car would have its advantages in high speed chases but he's out of his jurisdiction! In America you can tell that easily from the car model, colour, body wrap layout and of course the badge on the side. It doesn't matter of course because we all know its just for the movie, Buford has to be in his police garb, with his son, driving a wrecked police car, otherwise its not Buford T. justice. I think we all know what to expect with this movie by now. There isn't much time to blink without possibly missing something as the entire movie is literately one big chase and crash sequence after another. There is very little actual plot or character building going in between the chaos. We see one chase and crash, Buford suffering some kind of humiliation and his car getting more beat up as it goes, then move on the next chase and crash. The slapstick and pratfalls are on a grand scale with this one, perhaps even more so than before, where as the stunts are pretty predictable really, you can see what's gonna happen the second the scene starts. They even throw in some motorboat chases this time, just to mix it up a bit...a tiny bit. On the whole its more like watching banger/stock car racing on the streets, the mayhem is through the roof with gravity defying, unrealistic nonsense that is impressive in an odd way (gotta admire the stunt work). Its not really funny though, more childish and insane than anything, kids might like it but geez...even 'The Dukes of Hazzard' and 'Knight Rider' are more realistic. Put simply, it kinda works better than the second movie because they try something different, but it still doesn't work entirely because there is no Reynolds as the Bandit and Reed is no leading man. The Snowman on his own just doesn't hit the mark even if he is driving the famous black Trans Am Firebird. Definitely only for people who like these specific late 70's/80's madcap car chase genre movies. If you like to spot all the old cars, pickup trucks and big rigs, whilst seeing a good old crunch up with solid stunts etc...well you know already this is the movie for you.

Smokey and the Bandit Part 3 Quotes