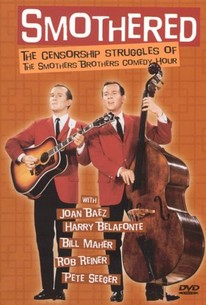 In February 1967, a comedy folksinging team comprised of siblings Tom and Dick Smothers assumed the hosting chores of a Sunday-night CBS variety program. Before long, The Smothers Brothers Comedy Hour was one of the network's most popular series, managing to hold its own against the formidable NBC competition, Bonanza. Gradually, the series evolved from an innocuous hour of music and laughs into a weekly political forum, largely driven by the antiwar sentiments of Tom Smothers and fueled by such young, hip writers as Mason Adams, Rob Reiner, and Steve Martin. The brothers began inviting "chancy" performers onto their series, among them the long-blacklisted Pete Seeger and singer-activist Joan Baez. Not surprisingly, the hidebound CBS executives balked at the series' incessant anti-establishment message, and the brothers found themselves at the mercy of the network censors. Thus began a well-publicized "David and Goliath" battle between the Smothers boys and the "Big Eye" network, culminating in the abrupt cancellation of The Smothers Brothers Comedy Hour in mid-1969. Relying heavily upon interviews with the participants in this imbroglio, not to mention rare (and long-suppressed) taped highlights from the controversial series, the two-hour TV documentary Smothered made its cable bow over the Bravo network.

There are no critic reviews yet for Smothered: The Great Smothers Brothers Censorship Wars. Keep checking Rotten Tomatoes for updates!

I have a new respect for the Smothers Brothers...