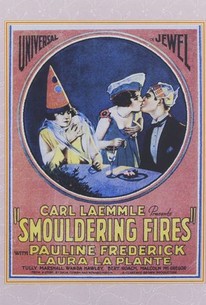 Smouldering Fires is a first-rate silent "soap opera," immaculately performed by its superb cast and brilliantly directed by Clarence Brown. Pauline Frederick plays a highly efficient middle-aged business executive, whose motto is "Let No Man Be Necessary to You." She discards this edict when she falls in love with her much-younger employee Malcolm McGregor. Though McGregor sincerely loves Frederick, her younger sister Laura LaPlante assumes that the man is a fortune hunter. After Frederick and McGregor are wed, LaPlante comes to realize that her new brother-in-law is sincere. She also realizes uncomfortably that she has fallen in love with McGregor, and he with her. Out of consideration for Frederick, the younger couple keeps their mutual attraction secret, and promise each other not to act upon their feelings. But Frederick eventually figures out the situation. Magnanimously, she declares that the marriage was a mistake, and that she'll seek a divorce before anyone is hurt. The aftermath of this triangular situation is subtly hinted at by a carefully arranged medium shot of the three principals. Never stooping to cliché or wallowing in phony sentimentality, Smouldering Fires is an honest tale about realistic people with genuine emotions. Most available prints are from the American release version; the slightly longer European version is even better, with some remarkably mature (albeit non-lurid) setpieces.

William Orlamond
as Member of the Committee

Bert Roach
as Member of the Committee

Rolfe Sedan
as Member of the Committee

There are no featured reviews for Smouldering Fires at this time.