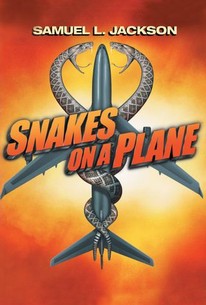 Critics Consensus: Snakes on a Plane lives up to its title, featuring snakes on a plane. It isn't perfect, but then again, it doesn't need to be.

Critics Consensus: Snakes on a Plane lives up to its title, featuring snakes on a plane. It isn't perfect, but then again, it doesn't need to be.

Critic Consensus: Snakes on a Plane lives up to its title, featuring snakes on a plane. It isn't perfect, but then again, it doesn't need to be.

Snakes on a Plane Photos

Forget terrorists or hijackers -- there's a handful of deadly assassins aboard a jet liner and they don't even have arms or legs in this airborne thriller. Neville Flynn (Samuel L. Jackson) is an FBI agent handling what seems like a routine assignment -- serving as bodyguard for Sean Jones (Nathan Phillips), a Hawaiian surfer dude who is flying to California to testify in a high-profile criminal trial after witnessing mobster Eddie Kim (Byron Lawson) murdering one of his underlings. However, Flynn's job gets a lot more challenging when he discovers Kim's associates don't want Jones to talk, and have devised a unique way to ensure his silence. A cache of highly dangerous poisonous snakes has been hidden on board the jet, and is released using a timed mechanism once the flight is well underway. The snakes quickly attack several members of the flight crew and are eagerly eying the passengers when Flynn decides its time to get medieval on the reptiles. Also starring Rachel Blanchard, Benjamin McKenzie, and Mark Houghton, Snakes on a Plane was produced under the title of Pacific Air Flight 121, but in several interviews Samuel L. Jackson expressed his enthusiasm for the script's original title, Snakes on a Plane, and the high-concept moniker quickly made the film's title and theme a favorite with bloggers and on Internet fan sites all over the world. ~ Mark Deming, Rovi

Darryl Quon
as Man in Suit

Drew Wicks
as Passenger No. 1

News & Interviews for Snakes on a Plane

The 21 Most Memorable Movie Lines of the Last 21 Years
Why Snakes on a Plane Fails as a Cult Film
Box Office Guru Preview: Make Way for McLovin

View All Snakes on a Plane News

Critic Reviews for Snakes on a Plane

A solid little B-movie arriving cloaked in the dodgy garb of a fanboy phenomenon, Snakes on a Plane really ought to garner some sort of award for truth in advertising: It's exactly what it says it is and very little else.

Intentional low camp always seems wrong unless it's very funny; in trash, one wants clumsiness, even a certain tackiness, and this movie has the production values and the high-tech fluency of a much bigger movie.

All those CGI snakes can be quite shudder-inducing. But there is also something cheerfully ridiculous in the way the film switches to rubber snakes for hand-to-hand combat.

All very well, but it is by no means the giddy delight that the fans hoped for.

Faced with such an enthusiastic fanbase, all that director David Ellis had to do was deliver on the promise of his brilliant title, and he has done exactly that.

A triumph of high-concept but low-ambition filmmaking.

An unforgettable phenomenon, based on a forgettable movie (15th anniversary)

Good bad fun right through to the crazed final act, and Samuel L. Jackson's ridiculous performance as the FBI agent who just wants to kick some asp is guilty-pleasure gold.

The fact is, the film isn't as bad as it wants to be, which isn't a good thing if you are going for that campy B horror movie feel.

The giddy awfulness of it all that makes it what it is - a wildly entertaining bad movie.

This is a good-looking film, and Jackson is just so much fun to watch. The other horror films that are out there? This one's a slither above them all.

A movie about snakes on a plane does not need to be straightforward; it only has a shot if it is either genuinely scary or so incredibly over the top it's funny. Snakes on a Plane is neither, but maybe Snakes on a Boat will be better.

Audience Reviews for Snakes on a Plane

Sure, hate me for saying this, but "Snakes on a Plane" is a good film in my opinion. No, not great, but there is this certain dumb charm the film has down to it's core that really made me enjoy watching it. Samuel L. Jackson is awesome in his role and the supporting cast could have been so much worse. You go in expecting snakes on a plane, and that is literally what you get, with a few human elements thrown in before and after which helped the films backbone a bit. It will never stand the test of time, and I will eventually grow out of enjoying it most likely, but it is a fun movie that I can watch over and over again. But yes, if you do not know what you are in for, just know, it is very very dumb and the effects are barely acceptable by 90's Hollywood standards. Overall, it's an enjoyably dumb movie.

I love this film. It's a modern 'B-Film'. if films were still presented in double features this would be lower film but I have a strong belief that most B-Movies are way better than their feature. This film came in at the right time, it helped to bring Samuel L. Jackson back into the fame he diserved by giving an amazing performance and another actor who really shined was Kenan Thompson. Before this film, to me, he was just the Good Burger employee in Kenan & Kel and a minor player in SNL. This film really put him on the map. There are other really good performances but let me just say, 'dont take this film too seriously'. This film, or at lease I feel, gives a sence of owning to it's cheesy title but not too cheesy to be a parody film. Far from a perfect film, but a pretty fun way to spend 106 minutes.

I cannot stress to anyone reading this review how hard it is for me to see why people didn't like this movie. Everyone I know loathes it! It's good ok. Simply because you get what you went to the cinema or popped the disc into your dvd player for. Snakes on a Plane. It makes good use of its budget and large cast of characters. My ONLY! criticism is that there isn't much development for the characters and that might have made this film a critically acclaimed success rather than a (less than deserved!) mixed to favourable review. Unfortunately, it's unlikely that would have ever happened. Because the show would always be taken by the snakes. The reason watch the film in the first place.

There's no possible way to defend Snakes on a Plane in any way, and I wouldn't try to. I have to admit that for the most part, I enjoyed it... at least for the garbage that it really is. It's hard to get into a movie about snakes without one real snake in the entire movie. It's basically a cross between a creature feature and Airplane!. Samuel L. Jackson has some great horrible one-liners and there's some hilarious death sequences. The problem is that it takes itself so seriously, despite the presence of comic relief from Kenan Thompson. It also seems like a played out sequence from an Indiana Jones movie, but maybe that's just me. It's crap, yeah, but it's enjoyable crap, so be warned if you try to go into this with any sort of seriousness. It's not that.

Snakes on a Plane Quotes