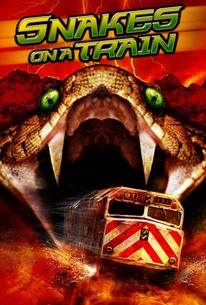 Snakes on a Train Photos

A cursed woman sends a train literally into the mouth of a giant snake in this Snakes on a Plane knock-off from Asylum Entertainment. After a couple flees an unsuccessful attempt to marry one of them off to royalty, a curse is laid upon the woman which makes her puke up snakes every few minutes -- a fate that can only be cured by a distant relative. Unfortunately the snakes keep on coming and soon a horde of these man-eating reptiles begin to terrorize a passenger train whose final destination is nowhere other than ludicrous land. The director, Peter Mervis, also helmed the similar - but much less preposterous - dreivative productions, Hillside Cannibals and The Da Vinci Treasure.

Jake T. Austin
as The Coyote

Sharon Zeev
as Passenger
View All

News & Interviews for Snakes on a Train

View All Snakes on a Train News

Critic Reviews for Snakes on a Train

Unfortunately, neither undiscriminating action fans nor connoisseurs of high camp will find much bite in this latest direct-to-video product from The Asylum.

It's not nearly as awesome as it sounds.

Asylum scores yet again with a hackneyed, lazy, horribly directed, and boring rip-off of another better film...

The Mallachi Brothers truly impress. Too bad they got stuck with a screenplay that can't hold itself above water and a studio stuck in one heck of a lame rut.

Audience Reviews for Snakes on a Train

So many reasons to see Snakes on a Train. So many reasons it was so bad...The acting was bad, The script was bad, the effects were bad, the ending was bad. But the most dissapointing thing of all is that the reason you watched the film for was in fact bad. That is, the Snakes were bad.

There is at least some nudity to look forward too...other than that...not so much.

Nope, not a sequel to the much hyped film of a similar name, but this independent cheapo rip-off sure as hell took advantage of its publicity. It's quite a dull film really with a bit of gore now and then, but it didn't have the budget to pull off the film effectively. An admirable but average effort.

A cheap cash in on 'Snakes On A Plane'. Completely misses the point by simply making a terrible film with awful special effects and no charm. Often looks like some grotty backyard home video. Can't be too harsh on it though as how can one insult a film that never even tried in the first place?

Snakes on a Train Quotes