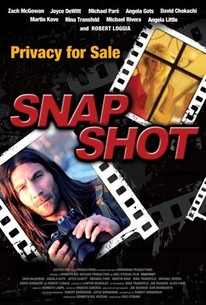 They say a picture is worth a thousand words. Former paparazzi Thomas Grady's most recent picture is certainly worth a lot more. Thomas (Zach McGowan) has inadvertently captured a scandalous, revealing shot of one of the world's most prominent and beloved figures-The First Lady (Joyce DeWitt). What ensues is a terrific conflict of morals, love and money. Selling the picture could resolve all of Thomas' professional and financial troubles, but it will also force him to confront the love of his life (Angela Gots) and his family (Robert Loggia, David Chokachi) as this photo puts the true nature of their relationships to a test. The choices aren't clear as the blurry line between the public's right to know and an individual's right to privacy is crossed. Then there's the President (Michael Pare) and The First Lady, who want the embarrassing picture back; how far do you think they will go to protect their privacy? Not to mention this could cost The President the upcoming election. Their henchman (Martin Kove) steps into the fray. Of course they are not the only ones who would like to get their hands on this photo. What would you do if it was your Privacy for Sale? How far would you go? Then there is the big surprise ending, which is reminiscent of 'The Sixth Sense' leaving viewers asking themselves 'How did I miss that?'. (C) Official Site

There are no critic reviews yet for Snapshot. Keep checking Rotten Tomatoes for updates!

There are no featured audience reviews yet. Click the link below to see what others say about Snapshot!