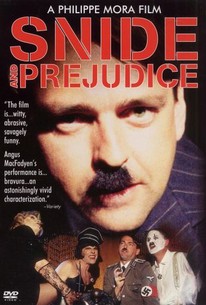 This unusual comedy-drama, set in an experimental psychiatric institute, is a departure for genre director Philippe Mora, whose usual oeuvre is science fiction, horror, and low-budget action films. Rene Auberjonois stars as Dr. Sam Cohen, director of the Temporal Displacement Foundation. Cohen's highly-offbeat but well-funded mission is to treat psychotic patients whose particular dysfunction is the belief that they are famous historical figures, with the chief therapy being psychodrama, the reenactment of passages from that figure's life. Although he has some patients who believe themselves to be artists or religious icons (Mick Fleetwood as Pablo Picasso and Jesse Grey Walken as Jesus Christ), Cohen's star patient (Angus MacFadyen) believes himself to be Adolf Hitler. The clever, mentally ill genius has inexorably drawn several fellow patients into his delusion, including Tessa (T.C. Warner), who now believes herself to be Eva Braun. Enacting the part of Hitler's father, Cohen hopes for a breakthrough with the group.

Brian McDermott
as Hindenberg
View All

A serio-comic tale of the absurd, Phillippe Mora's film isn't a perfect film, but it is bold, enveloping and fantastically thought-provoking, anchored by a vivid, maniacal, full-throttle performance from Angus Macfadyen.

There are no featured reviews for Snide & Prejudice at this time.