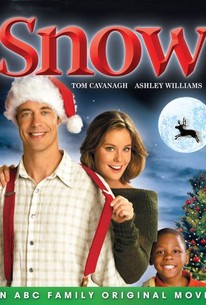 This made-for-cable comedy takes place in the three days before Christmas. While training to be successor to Santa Claus at the North Pole, nerdy Nick Snowden loses his favorite reindeer Buddy. Tracing the animal to a zoo in San Ernesto, California, Nick meets and falls for female zookeeper Sandy Brooks (Ashley Williams)--who in addition to being a kindred spirit would seem to be an ideal candidate for the future Mrs. Santa. Hiding his true identity, Nick moves into Sandy's boarding house, where he meets a street-smart kid named Hector (Bobb'e J. Thompson). Although Hector tumbles to the fact that the beardless Nick is actually St. Nick, he agrees to keep his secret and to help him recover his reindeer. Meanwhile, Buck Seger (Patrick Fabian), the nasty big-game hunter who "kidnapped" Buddy in the first place, concocts a scheme to sell the poor animal for an exorbitant sum. Snow was originally telecast by the ABC Family Channel on December 12, 2004.

Karen Robinson
as Isabel
View All

Bumbling Santa looks for a Mrs. in light tale.

Really unspectacular. I would skip this one - even for Christmas.