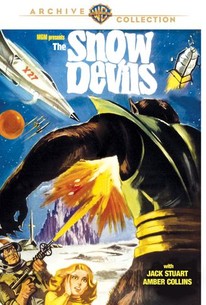 Also known as Snow Devils and Devil Men From Space, this Italian melodrama is a muddled mixture of two popular film genres. Part of the story is given over to a search for the destroyers of a Himalyan weather station. When the search party reaches their destination, they are captured by what seems to be a tribe of abominable snowmen. We soon learn that the blue-tinted beasties are actually the vanguard of an invading army of extraterrestrials. Heading the cast of Snow Demons are Jack Stuart (also known as Giacomo Rossi Stuart) and Amber Collins (aka Ombretta Coli); the director was Anthony Dawson (aka Antonio Margheriti; do we detect a pattern here?) The film was originally released as I Diavolo della Spazzio.

A schlocky cheapo futuristic sci-fi film made in Italy that is a weird rather than a good one.

There are no featured reviews for Snow Devils (I diavoli dello spazio) at this time.