Snow White and the Huntsman2012 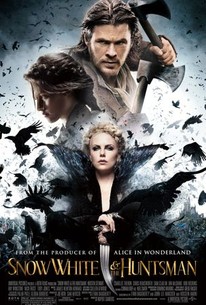 Critics Consensus: While it offers an appropriately dark take on the fairy tale that inspired it, Snow White and the Huntsman is undone by uneven acting, problematic pacing, and a confused script.

Critics Consensus: While it offers an appropriately dark take on the fairy tale that inspired it, Snow White and the Huntsman is undone by uneven acting, problematic pacing, and a confused script.

Critic Consensus: While it offers an appropriately dark take on the fairy tale that inspired it, Snow White and the Huntsman is undone by uneven acting, problematic pacing, and a confused script.

Snow White and the Huntsman Videos

Snow White and the Huntsman Photos

In the epic action-adventure Snow White and the Huntsman, Kristen Stewart plays the only person in the land fairer than the evil queen (Charlize Theron) out to destroy her. But what the wicked ruler never imagined is that the young woman threatening her reign has been training in the art of war with a huntsman (Chris Hemsworth) dispatched to kill her. Sam Claflin joins the cast as the prince long enchanted by Snow White's beauty and power. -- (C) Universal Pictures

Chris Hemsworth
as The Huntsman

Peter Ferdinando
as The Black Knight

Andrew Hawley
as Guard on Duty

Tom Mullion
as Soldier
View All

News & Interviews for Snow White and the Huntsman

20 Great Performances in Rotten Movies
How Family-Friendly is The Huntsman: Winter’s War?
RT on DVD & Blu-Ray: Snow White and the Huntsman

View All Snow White and the Huntsman News

Critic Reviews for Snow White and the Huntsman

What you take away from this dark film, filled with several twisted characters and twisty turns, is a great deal of nicely-crafted atmosphere, and a terrific performance from Charlize Theron as the evil stepmother.

Rupert Sanders' vision of enchantment is a Thomas Kinkade painting brought to life.

Not a perfect movie by any stretch of the imagination, Snow White and the Huntsman can boast truly magnificent performances--minus Stewart, of course--an interesting take on a beloved tale, and gorgeous scenes. Too bad about some of that plot though.

Strong effects, good design, and an exciting use of nature help to empower Stewart and Theron, who inject a rich, double dose of feminism.

Stewart's Snow White, meanwhile, pouts her lips, bats her bedroom eyes, and scarcely seems to have more on her mind than who might take her to the senior prom

For a movie that so desperately wishes to be Tolkienesque, it's a questionable choice to burden it with both the Snow White moniker and Kristen Stewart.

For a creaky old fairy tale considered by many to be past its bedtime story prime, this Snow White turns out to be much, much better than expected.

The film fills a void by serving up a darker fairy tale amongst Hollywood's currently lighter, more cartoon-flavored action flicks.

This could have been a unique spin on a classic, full of visual stunts that enhance the story. Unfortunately that's not the case.

Casting is one of the shortcomings of Snow White and the Huntsman.

The biggest disappointment is its mediocrity, as it could have been the ultimate dark retelling of the classic fairy tale.

Audience Reviews for Snow White and the Huntsman

There was a part that made me think they were copying Lord of the Rings with Snow White playing the part of Frodo. I was not too impressed with the movie.

The darker tone is consistent with the German original tale but it is hard to overlook the problems in this adaptation: the dwarfs totally wasted, a pathetic love triangle that rivals that of Twilight, Bella Swan rapidly turning into a warrior as soon as required by the script, and so on.

Of the endless adaptations of "Snow White and the Seven Dwarfs," it was not expected that a Kristen Stewart-lead version would be enjoyable at all, but this is a surprisingly good film, not without it's flaws however; Following the origin of the titular character, audiences get to see a new version of where her character comes from, as well as a gritty take on her. Now, let me first start by saying Kristen Stewart is easily the weakest part of the film by far, which is frustrating, given her role in the film. This was expected however, due to the talent in Chris Hemsworth and Charlize Theron by her side for the majority of the picture. Not only does this film add changes to the classic tale, but it also delves into emotional storytelling that was never really present in the Disney adaptation, or something like "Mirror Mirror." Chris Hemsworth is the stand-out in my opinion, stealing the screen every time he appears. His back story, mixed with his quick-wit, really makes for an enjoyably bad-ass character with heart to back it all up. That being said, his character is surrounded by performers who seem to be phoning it in most of the time, and when he comes across the dwarves, they are very standard-looking (almost taken right out of a tolkein novel), which makes him stand-out even more. Hemsworth's performance is distractingly great in this film. The story itself does have some changes, but for the most part it is very similar, with a few dark tones added in. The war aspect was obviously the biggest addition, and while nobody ever would have pegged a Snow White adaptation to be like this, the action works it's way into this film very well. The climax is great and very fun to watch. The visual effects are pretty impressive for the most part and the story has nice arcs, stopping for tender moments between characters and picking up just before getting too boring. As a whole, this film succeeds more than most movie goers would expect it to. In my opinion, this is a very solid film all around. Since this story is as old as time, there is not much else to say here. "Snow White and the Huntsman" takes more time to be a good film than one might expect, despite a sluggish performance from Kristen Stewart and a slightly over long running time. There are a few instances of lazy dialogue, but they are forgiveable later on the in the film, as the are always made up for with an emotionally unexpected scene. This film is not great by any means, but it is very enjoyable when you have nothing else to watch. Therefore, I give this a nice recommendation to young adults. It is very much in that demographic. "Snow White and the Huntsman" is a treat for fantasy fans or action/adventure junkies alike. I might enjoy this movie more than most people, but it seems to get better and better upon each viewing. Very enjoyable film.

There was a good idea in there somewhere---and several of the sequences are admittedly visually stunning---but ultimately Snow White and the Huntsman is a poorly developed film that takes itself too seriously and tries to accomplish too much with a thinly written, and unintentionally laughable screenplay. As an added flaw, the film badly steals from the vastly superior The Chronicles of Narnia: The Lion, the Witch, and the Wardrobe, which, unlike Huntsman, stands near the top of the fantasy genre.

Snow White and the Huntsman Quotes