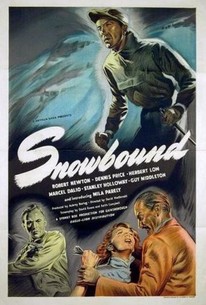 A frequent visitor to the Late Late Show, the Anglo-American Snowbound is set in the frozen Alps. Robert Newton and Dennis Price head an expedition in search of a fortune of gold, stashed away by the Nazis in the last days of the war. Snowed into an old cabin, the men quickly get on one another's nerves. Just when tension reaches the boiling point, one of the party saves the day. He happens to be a movie screenwriter, who uses his cinematic knowhow to reach a solution to their dilemma. Snowbound is based on The Lonely Skier, a novel by Hammond Innes.

The story is not convincing and neither is the studio bound snow, but most of all its lack of action should disappoint viewers.

There are no featured reviews for Snowbound at this time.