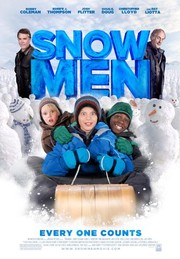 Alexandra C
September 17, 2011
I loved this movie. I saw it twice at the Dallas Film Festival and it gets better each time you see it. A great film about being content with what you have and never underestimating the ultimate plan that is unfolding without our knowledge. I enjoyed the child actors too. :) So in my opinion, a film with a great message that is both family friendly and enjoyable.

Eduardo L
September 15, 2011
You just do not find movies like SNOWMEN out there anymore. It is great to see that someone had the courage to make a film that inspires all demographics and is infused with good values! Bobby Coleman is simply extraordinary as the charismatic and outgoing lead. Everyone should watch it!

Catherine F
September 15, 2011
The movie SNOWMEN is as entertaining as it is moving! This is the perfect family movie for the end of the year as the weather gets colder. It was fun seeing Christopher Lloyd (Back to the Future!) AND the movie isn't all fluff - it touches on some profound points - which is nice for a change! The cast was compelling and I will definitely be taking my younger brothers and sisters to opening weekend!!

Ashley J
September 15, 2011
Such a great family film. I laughed and cried and was totally surprised by the ending. Bobby Coleman is such a great little actor!

George M
September 15, 2011
Heard from friends who saw it at the Dallas Film Festival that it's amazing. Funny, moving and best of all FAMILY FRIENDLY!

Danielle L
September 15, 2011
LOVED this movie! Bobby Coleman is great, along with the rest of the cast! It is rare to see a film that can make a kid ask questions that they may otherwise never think to ask.

Lucy M
July 21, 2011
I was touched by this heartwarming story, a whimsical exploration of life and death through the eyes of a child. Great one for the family to enjoy.

Will M
July 18, 2011
Snowmen is a great coming-of-age tale that possess the necessary twists and turns that grip an audience from the very beginning. The character's are captivating and the climax is tear-jearkingly emotional. A must-see family movie.

Brandon B
April 19, 2011
"Snowmen" has the feel of a made-for-television movie on a family cable channel; its heavy-handed treatment of foreshadowing and symbolism abuse the intelligence of the audience, and it tries to cash in on emotional response before viewers have even grown familiar with the characters.

While it had a promising start in introducing the story of Billy, a terminally ill child who befriends his new neighbor from Jamaica, we're quickly thrust into a script that's so trite that several of the emotional climaxes missed my hearstrings and hit my funny bone.

The camera beats the audience over the head with the ominous "thin ice" sign so many times throughout the movie, and with such flagrant obtrusiveness, that I was amazed to hear a gasp or two when - surprise - the ice broke. The bullies are cardboard characters who display sudden changes of heart in the final act of the movie for no reason other than the fact that the script calls for them to do so.

Ray Liotta plays Reggie Kirkfield, father of Billy, and does a bang-up job hitting the beats during the few emotionally genuine sequences. The rest of the film has him playing a comically obsessed used car salesman, and while simplistic, the character adds a pleasant dynamic to the film.

Christopher Lloyd's appearance is a matter of moments, and his soliloquy is so banal that I am loathe to mention it. Lloyd delivers the disappointing lines with consummate skill, however, and if there are links that keep this film from drowning, he is one of them.

Reggie does finally overcome his obsession with getting face-time for his business, but there are two problems with this scene. The first is that we learn halfway through the film that Billy's family is snowed under with medical bills from his cancer treatments, and that his father's attempts at publicity are likely motivated by his desire to bring his family out of debt and into financial stability.

The second problem is one of symbolism, and it is the most heinous of all violations of subtlety in the film. As Billy's father veers his truck off the road and onto a frozen lake to save his son, the sign bolted to his truck (and so often maneuvered in front of cameras as part of his attempts at publicity) comes tumbling down in a moment of dramatic resolution. This ostensibly signifies Reggie's choice of his son over his business, but if the audience accepts that Reggie's sales fervor is an attempt to regain his family's financial stability, this metaphor doesn't make much sense.

After the screening I spoke with several people who genuinely enjoyed the movie, so there are viewers who will appreciate the traditional nature of its plot. It is my opinion that Robert Kirbyson could have done much more with the cast he had at his disposal, and the crew could take a bit more care to respect the intelligence of its audience.