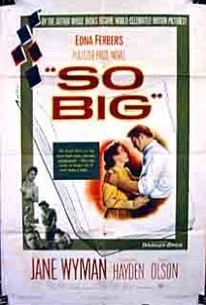 This 1953 tear-jerker is the third film version of the Edna Ferber novel So Big. Stepping into the role previously essayed by Colleen Moore and Barbara Stanwyck, Jane Wyman plays Selina, a girl of wealth who comes to a Dutch community outside Chicago as a schoolteacher. Here Selina falls in love with poor but big-hearted truck farmer Pervus DeJong (Sterling Hayden). When Pervus dies, Selina is left a widow with a small son and little else to her name. Through grit and perseverance, Selina single-handedly raises the boy, who grows up to be architect Dirk DeJong (Steve Forrest). Taking a cue from his self-sacrificing mother, Dirk devotes himself to creativity rather than money-grubbing while pursuing his profession. Meticulously produced, So Big is one of the better "saga" soapers of the 1950s, with Jane Wyman repeating her "aging" process from 1951's The Blue Veil. ~ Hal Erickson, Rovi

Richard Beymer
as Roelf as a youth

Critic Reviews for So Big

It remains engrossing in a film that is often cloying, and that smears realistic scenes with fancy speeches.

There are no featured reviews for So Big at this time.