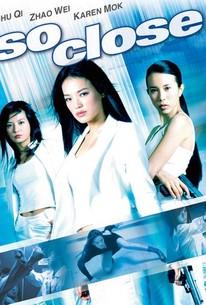 A high tech corporation is sent into turmoil when hackers demanding ransom break into their internal computer system with a powerful and apparently unstoppable virus. A mysterious, beautiful young woman who calls herself "Computer Angel" quickly saves the business. But when she requests a meeting with the company's shady CEO, he gets more than he bargained for. Lynn (Shu Qi of The Transporter) turns out to be a highly skilled assassin, who knocks off the CEO with the help of her rambunctious younger sister Sue (Zhao Wei of Shaolin Soccer). Sue uses a powerful computer program developed by the girls' murdered father, which uses satellites to tap into closed-circuit security cameras, enabling her to see where all the cannon fodder/guards are and direct Lynn's escape, while taking over the security team's audio system to pipe in a cover of the Carpenters' "(They Long to Be) Close to You." But things soon get dicey for Lynn and Sue. A brilliant, sexy forensics expert, Hong (Karen Mok, who also sings the film's theme song), is hot on their trail, and the creeps who hired the girls decide to cover their tracks by killing them. Complicating matters further, Lynn reunites with an old flame and contemplates giving up the business and settling down, much to Sue's chagrin. So Close was filmed in Mandarin, necessitating (reportedly poor) dubbing into Cantonese for the Hong Kong release. The film was directed by Corey Yuen, who made his Hollywood debut with The Transporter. Before that, he was best known for his fight choreography on many of Jet Li's films. So Close was shown at the Subway Cinema's 2003 New York Asian Film Festival.

May Kwong
as May

Wong So Pik
as May

Ricardo Mamood
as Peter
View All

Critic Reviews for So Close

A delirious example of grrrl power, Hong Kong style...master action choreographer Yuen keeps topping himself with one battle royal after another.

If stiletto-heeled heroines outfoxing legions of dunderheaded males are what you're looking for, seek no more.

Charlie's Angels only wish -- in some corner of their empty, overstimulated minds -- that they were as cool as the chicks in So Close.

Has moments of style and audacity, but the script is a shameless muddle and the shifts in tone -- from gooey romance to hard-driving, hyper-pop action -- give the impression that the movie was directed by six or seven people in alternating shift.

Contains some clever set-pieces, mostly involving a Cyrano-type communication between the sisters.

Part of the feedback loop created when The Matrix, which co-opted Hong Kong filmmaking styles, began to influence Asian cinema itself.

could suck a tennis ball through a keyhole

...wait'll you get to the movie's finale, which shamelessly cribs from Die Hard but adds kung fu chicks and samurai swords. Honestly, haven't you always hoped someone would do that?

A movie that's notable not so much for actually being well made, but for being exactly what a large chunk of the audience lives for - explosions, fighting & girls in next to no clothes.

Audience Reviews for So Close

This should rank as a guity pleasure but falls short even at that. It is as bad as the Charlies Angel's films, just less annoying, and with women who are actually attractive (except Karen Mok, heh). For a cheesy-but-fun all female actioner go for The Heroic Trio instead of this.

This action adventure is a cross between the Charlie's Angels' films from America and the Raider (Tokyo and Seoul) films from China. Put these two series together and you have a better than average action movie.

The story turns out to be more deep than one may expect and while it does have its dramatic points, it is hard to complain about them when it involves Shu Qi or Zhao Wei. This film is about an 1 hour and 50 minutes and it does seem a bit long for a movie like this, but that is because of the slow segments, which are the meat of the story.

There is a good amount of action throughout this film and each of the 3 female leads gets a chance to shine. For the most part, the action is nothing spectacular and the CG is a little weak. Director Corey Yuen decides to go with a handful of slow motion shots for the fights and some upbeat music in the background, like the Raider films. If you like this kind of stuff, then this is the movie for you. The last 20 minutes is one long action sequence, which includes guns, hand-to-hand combat, and swordplay. The swordplay at this part is pretty impressive, if I may say so. We can thank Yasuaki Kurata, from Jet Li's Fist of Legend, for being the villain in this fight.

The acting is everything you expect from a film like this. The females are pretty, but they also do a decent job with their characters. Shu Qi is Shu Qi. Zhao Wei, of Shaolin Soccer fame, does a good job, especially in the second half. Karen Mok actually shows that she is the better actor and fighter of the three.

So Close is not an explosive big budget action adventure, but this is still a good watch to pass the time.

W O W ! This movie is completely amazed me! I love the story that they made with the great character picks too... So bad one of them must die first...