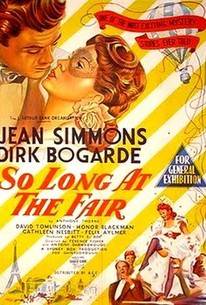 So Long at the Fair Photos

So Long at the Fair is based on a true story -- or at least, a story that has been told and retold so often that it is now accepted as truth. The year is 1889: the setting, the Paris Exhibition. Among the thousands in attendance are Vicky Barton (Jean Simmons) and her brother Johnny (David Tomlinson). After the first night of the Exhibition, Vicky is exhilarated, while Johnny seems a bit under the weather. The next morning, Vicky knocks on Johnny's hotel door, only to discover that her brother has disappeared. When she goes to the police and, later, to the British consul, the authorities refuse to believe her story. In fact, there is no evidence that Johnny ever existed! The outcome of this story is rather well known; still, it is perhaps best not to reveal any further details. ~ Hal Erickson, Rovi

Natasha Sokolova
as Charlotte
View All

Critic Reviews for So Long at the Fair

Audience Reviews for So Long at the Fair

a neat british thriller, a little reminiscent of the lady vanishes. a brother and sister travel to paris for the exhibition circa 1900 and on awakening the next morning the sister finds both her brother and even his room have mysteriously disappeared in the night. said to be based on a true story but perhaps more of an urban legend. lovely performances by the stunning jean simmons and dirk bogarde, as an artist who's the only one who believes her story. an early work of terrence fisher who went on to fame directing hammer horror films.

So Long at the Fair Quotes