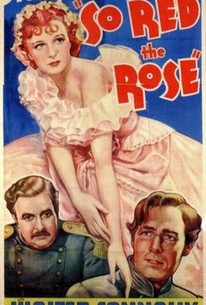 So Red the Rose Photos

So Red the Rose is a Civil War drama that plays like a warm-up for Gone With the Wind--and, unlike Wind, has two genuine Southerners in the leading roles. Margaret Sullavan is the aristocratic mistress of a sprawling Southern plantation, whose sheltered lifestyle is rent asunder by the War. All that sustains her during the conflict's darkest days is her love for her distant cousin, a Confederate officer played by Randolph Scott. Despite the incursions of Yankee troops (most of whom are portrayed as one step above gorillas), Sullavan holds her family together even after her mansion is burned to the ground. She even manages to talk her slaves out of rebelling, in a scene that must have caused embarrassment for everyone concerned in later years. The fact that So Red the Rose died at the box office (industryites dubbed the picture "So Red the Ink") was the principal reason why so many producers turned down Gone with the Wind a few years later. ~ Hal Erickson, Rovi

Critic Reviews for So Red the Rose

The best film King Vidor has directed since... The Grand Military Parade. [Full review in Spanish]

The Stark Young novel of the South and the Civil War transferred to the screen, with great charm and beauty.

There are no featured reviews for So Red the Rose at this time.

So Red the Rose Quotes