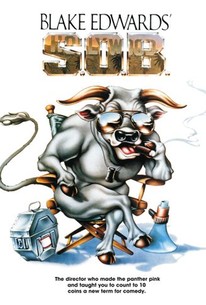 Critics Consensus: A sustained blast of unbridled vitriol from writer-director Blake Edwards, S.O.B. is one of the blackest -- and most consistently funny -- Hollywood satires ever put to film.

Critics Consensus: A sustained blast of unbridled vitriol from writer-director Blake Edwards, S.O.B. is one of the blackest -- and most consistently funny -- Hollywood satires ever put to film.

Critic Consensus: A sustained blast of unbridled vitriol from writer-director Blake Edwards, S.O.B. is one of the blackest -- and most consistently funny -- Hollywood satires ever put to film.

In this biting comedy satirizing Hollywood cynicism from writer-director Blake Edwards, Felix Farmer (Richard Mulligan) is a motion picture director whose career is on the skids. Having just completed a family musical that is sure to be a $30 million flop, Felix knows that his days are numbered and tries unsuccessfully to commit suicide. When he recovers, Felix suddenly has a brainstorm and hatches a scheme to buy the film back from his studio and lens new scenes that will turn it into a pornographic movie with big stars, a sure-fire box office winner. In order to pull it off, he'll need to convince his female lead and wife, Sally Miles (Julie Andrews, not coincidentally the director's real-life wife) to defy her wholesome, squeaky-clean public image by baring her breasts on film. S.O.B. (1981) was the final film of legendary actor William Holden. ~ Karl Williams, Rovi

Scott Allen
as Surfer on Beach

Corbin Bernsen
as Surfer on Beach

It is quite clear that Edwards knows exactly what he is talking about, and relishes the opportunity so to do. S.O.B. is his best film since Breakfast At Tiffany's.

Black comedy is a tough commodity to sustain and, after a broad start, Edwards quickly finds a deft balance that paints a cockeyed, self-contained world that comfortably supports its exaggerated characters.

It seems more like an expectorant for Edwards' bile than an entertainment aimed at an audience.

It's a nasty, biased, self-serving movie that also happens to be hilarious most of the time.

What I regard as Edwards' crowning achievement. It is a wickedly funny, impeccably cast, ingeniously subversive satire of the Hollywood film industry.

A would-be Jonsonian satire on Hollywood, or Freddie Bartholomew Fair, the film is as misconceived as it is ill-executed.

...SOB lives up to its title, and like the central character it describes, it's a hot, sticky mess that's hard to scrape off your shoe....

Aside from a joke and an entertaining scene here and there, the movie lacks humor and repeats itself. [Full Review in Spanish]

Cynical satire on Hollywood has no punch, just a lot of inane jabs.

S.O.B. is a poison pen letter to the industry, a film of undisguised hatred. Edwards' sense of the funny has sunk to sour insults.

Blake Edwards' outrageous S.O.B. may never be held in the same regard as Sunset Boulevard or The Player, but as a searing satire about the underbelly of the Hollywood lifestyle, it still ranks as one of the best.

I mostly watched this to see Julie Andrews 45 yr old boobies. Guess what? They were fantastic! The movie was decent too, but no masterpiece.

I saw this a million years ago but i think i liked it.

This movie has an amazing cast and a great deal of potential but it's a little too all over the place. But...it has one of my favorite things in the world of movies...Squeaky clean actors I like/love doing/saying inappropriate things! Julie Andrews appears topless and says some bad words and, for me, that makes it almost worth recommending.