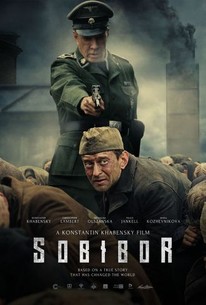 "Sobibor" tells the story about the only successful revolt in a Nazi death camp during World War II. The rebellion, led by the Soviet prisoner Alexander Pechersky, took place in the Nazi death camp Sobibor, located in Poland, in 1943. The movie focuses on Pecherky and the difficult choices he makes to organize the rebellion and escape. He risks many lives, including his own, to set free hundreds of Jewish prisoners. These very different people show equal heroism and courage and are united by the desire to live.

The question is whether a button-pushing movie like "Sobibor" is the ideal way to experience it.

See Sobibór. Absorb its messages. Teach your children about hate, in all its forms. Then, teach them to love.

While the entire film has been downbeat (to say the least) the film turns itself into a paean to freedom. It is strong change of tone.

a fine and moving film, but one can't help but wish that Khabenskiy had better trusted the inherent impact of the story and not tried to escalate it quite so much

The film is even more interesting coming from a Russian perspective. The violence, suffering, death and loss are heartbreaking.

As grim as the story and the moment in history is, the film des offer moments of light and community within the camp.

Grimly strives to make up for the fact that for almost 60 years, Soviet/Russian leaders downplayed Jews were targeted by the Nazis...The Jews needed military organization.

It's not an easy film, but it tells a valuable story. [Full review in Spanish]

There's a harrowing potency to the violence, and the adrenaline pumps during its final act, but the film overall lacks depth and complexity.

The story is told well.

A courageous Russian Jew leads an escape from the Sobibor concentration camp and is praised by both Russia and Israel.

There are no featured audience reviews yet. Click the link below to see what others say about Sobibor!