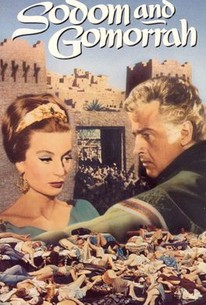 This graphically violent epic recreates the decadence and events that lead to the downfall of the biblical cities of Sodom and Gomorrah.

Ellen Kessler
as The Dancer

Alice Kessler
as The Dancer

Critic Reviews for Sodom and Gomorrah

Sodom and Gomorrah has many of the faults of the Biblical epic, but many good qualities.

This isn't really as awful or as campy as you might expect, but it's not exactly a masterpiece either.

It is an obvious but feeble imitation of "The Ten Commandments" of Cecil B. de Mille, and it is much more concerned with salt-mining than it is with debauchery or lust.

Sin is suggested by languid groups of people, nattily dressed in '60s evening gowns, lolling around on the floor, while the virtuous Hebrews look more like a bunch of self-sufficient drongos droning on about making the land fertile.

In this case silliness triumphs over everything - morality, script, cast and music; it even triumphs over dis- approval-you can't be disgusted at anything quite so preposterous.

Aldrich makes the most of the story's depravity, dredging the depths of lust and betrayal as Granger locks into a bitter power struggle with the cities' sultry queen, Aimée, and her ambitious brother Baker.

An interesting addition to the Aldrich filmography, which is laden with moral cynicism.

It has all the disadvantages of the Sword and Sandal epics without too many of the advantages.

Audience Reviews for Sodom and Gomorrah

Sodom and Gomorrah was a big flop when it was released and has been nearly forgotten since then. This is a shame. It's certainly no classic like Ben Hur or Spartacus,and it has the obvious flaws many films like this share-corny dialogue,woman's make-up and hair which betrays the decade the film was made in,to name but two-but if you like this kind of film it's very entertaining and worth a watch. At times you could swear De Mille directed it,but it was actually directed by Robert Aldrich,a real curio in his career. The first hour does dawdle along a little,but the middle of the film contains a very lengthy battle sequence which is extremely impressive. In these days of CGI,it's great to see hundreds of REAL people fighting on the screen,and it's great the way the battle is in stages and shows various tactics by the two sides instead of just being a chaotic mess. The climatic destruction {well,it's based on a well known Bible story, so I don't think this is a spoiler!} of the twin cities of Sodom and Gomorrah {although we only seem to see Sodom} is still quite a well achieved spectacle,in fact technically the film still generally holds up,except for a few very unconvincing shots when an army is engulfed in water. Those who find some of the film a little heavy can enjoy the odd touch of vivid sadism {people on a wheel lowered into fire,a prisoner threatened by a blind man whose armour produces spikes when he breaths} and plenty of references to the 'sins' of the Sodomites-nothing is explicit,but things such as incest,sexual servitude and lesbianism are certainly hinted at. Yet the Hebrews,by comparison,are such a dull humourless lot,one might occasionally sympathise with the Sodomites,and this was maybe intended. As with most of Aldrich's films,it's actually quite cynical,and doesn't take easy sides. Stuart Granger is fine as Lot but it's the underrated Stanley Baker,as the scheming Astorath who chases anything in a skirt, who gives the stand-out performance,memorably corrupt. One should also mention Miklos Rozsa's superb score which ranks along side his other classic scores for related films like Ben Hur and El Cid. He superbly evokes the period and setting whilst providing a gorgeous love theme and a number of other great themes. Of course it's very melodramatic,but it suits the film! Sodom and Gomorrah exists in several heavily cut down versions which may quicken the pace but are extremely choppy,often cutting into scenes when they are obviously half way through. The full 155-odd minute version is sometimes shown,and is available in some countries on DVD,but really demands a proper,remastered,etc. release. It's really worth seeing,as long as you like this kind of stuff of course!