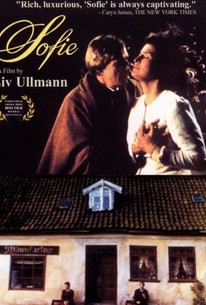 Based on the 1932 novel Mendel Philipsen and Son by Henri Nathansen, Sofie was adapted for the screen by celebrated actress Liv Ullmann, making her directorial debut. Beginning in Copenhagen during the late 1880s, Sofie (Karen-Lise Mynster) is a devoted Jewish daughter who falls in love with the Gentile painter Hojby (Jesper Christensen). Her parents, Semmy (Erland Josephson) and Frederikke (Ghita Nørby), don't approve of the relationship, so they encourage her to marry her mentally ill cousin, a Swedish shopkeeper named Jonas (Torben Zeller). She gives birth to a son, but their already loveless marriage becomes further complicated when Sofie develops an interest in her brother-in-law Gottleib (Stig Hoffmeyer). Jonas is inconsolable after the death of his mother (Kirsten Rolffes), so much so that Sofie has him institutionalized and takes over his business. Years later, Sofie returns to Copenhagen with her son to help her aging parents and attend an auction where she reunites with Hojby.

Lone Herman
as Malle
View All

If you have the time to invest, you'll get a most pleasant cinematic return from Sofie.

A beguiling and bittersweet film.

Liv Ullmann's attempt to move beyond the shadow of Bergman proves to be rewarding.