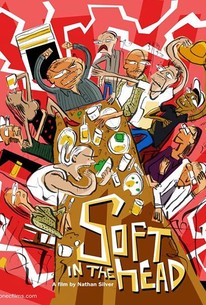 Soft In The Head Photos

Thrown out of her New York City apartment, Natalia, a 25-year-old hot mess, relies on the kindness of friends and strangers. Seemingly unaware of the havoc she wreaks, she skips from one place to another, including her best friend's, where she crashes a holiday meal and seduces the best friend's socially inept brother. Natalia ends up staying at a shelter run by genuinely good Maury, who takes an interest in making her life better -- but life is not that simple, and tragedy ensues. With a menagerie of New York characters, set against the backdrop of a homeless shelter, a religious household, and the cacophonous streets of New York, SOFT IN THE HEAD is a look at how easy it is to lose one's head in the big city, particularly for those already lost. (C) Official Site

Nathan Silver
as Malford
View All

News & Interviews for Soft In The Head

View All Soft In The Head News

Critic Reviews for Soft In The Head

The movie impresses, maintaining a sense of anxiety through tight shots and a sound design that favors overlapping voices and constant clatter.

"Soft in the Head'' is drab, ramshackle stuff - up in everyone's face, and finding very little there.

A concise and blistering indie that captures a sense of volatile madness via sharp handheld aesthetics and a commanding lead performance from Sheila Etxeberria.

It's a film that's sad, funny, and features a slew of characters difficult to like as they're viciously realistic in that they seem wholly incapable of making decisions to benefit themselves.

Audience Reviews for Soft In The Head

There are no featured audience reviews yet. Click the link below to see what others say about Soft In The Head!

Soft In The Head Quotes