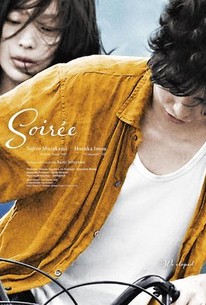 Shota, who wants to be an actor, and Takara, who works in a seniors' home. Two people who have given up set out on their own road movie. Shota comes to Tokyo hoping to become an actor. His dream seems very far away, though, in his daily round of workshops, auditions, and part-time jobs. Then, through a drama group of which he is a member, he gets a position teaching drama to the inhabitants of a seaside senior citizens' residence near to where he grew up. This is a turning point in his life. At the "Sakura Garden" he meets Takara, a woman of his own age who works there. There is something about the hopeless look in her eyes as she works that strikes Shota. He invites her to a festival, and on his way to meet her encounters an astonishing sight. The two end up causing an accident, Shota takes Takara by the hand, and they head off. Their journey-or their elopement-has now begun.

There are no featured reviews for Soirée at this time.