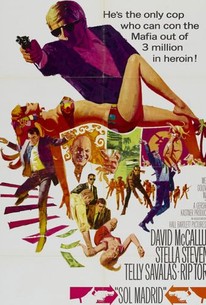 Sol Madrid isn't a western, as might be gathered, but a drug-ring melodrama. David McCallum shows up early in the film as a spaced-out junkie. But Man From UNCLE fans need not worry: McCallum is actually an undercover agent, looking for the source of heroin being trafficked by the Mafia. The top man in the Mexican-based narcotics operation is the man you'd least likely expect -- especially when one remembers the sort of roles the guilty party had previously played in his long career. Based on Robert Wilder's novel Fruit of the Poppy, this went out to British moviehouses under the title The Heroin Gang. ~ Hal Erickson, Rovi

Madge Cameron
as Woman in Cantina

There are no featured reviews for Sol Madrid at this time.