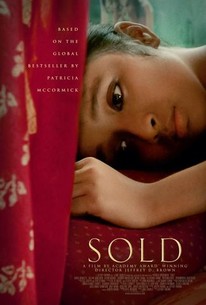 SOLD is a narrative, feature film adaptation of the globally acclaimed novel by Patricia McCormick. Based on true stories, SOLD, is the story of Lakshmi who journeys from a pastoral, rural village in Nepal to a gritty brothel/prison called Happiness House in Kolkata, India. Through one extraordinary girl's story, SOLD illustrates the brutality of child trafficking, which affects millions of children around the globe every year. Globally the average age of a trafficked girl is thirteen, the same age as the girl in the film. SOLD is a call to action, and a testament to the power and resilience of the human spirit.(C) Official Site

"Sold" is maudlin in a way that makes its audience, paradoxically, feel good, albeit superficially. A story of human trafficking should move us on a deeper, more uncomfortable level.

All of this is uncomfortable to watch. Then again, given the subject matter, it should be.

[Brown] does his best to suggest the lighter side of the subject, especially in a furiously choreographed Bollywood number that captures the heroine's rare moments of joy.

"Sold" is colorful and visually pleasing, although there is nothing surprising in the rather predictable story. But then again, it was likely not Brown's intent to supply endless twists and turns.

The film gives us a vibrant, tangible sense of place, the color and dust of a crowded ancient city, and the layers of secrecy and corruption under which Lakshmi and those like her are trapped.

Sold isn't cheap or shoddy and the relationships between the captives is affecting, but it's impossible to shake the feeling that it would make more sense in a lecture hall than in a theater.

The film has a worthy message, but doesn't present its brave young heroine's story compellingly.

Brown makes it clear that what happened to Lakshmi is not her fault - and more importantly, she's never passive, taking her fate into her own hands.

This earnest low-budget drama reinforces a worthwhile message about global sex trafficking, but it's more admirable for its effort than its execution.

There are no featured audience reviews yet. Click the link below to see what others say about Sold!