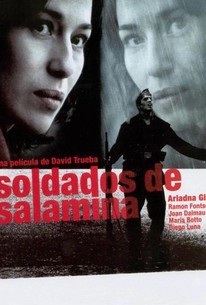 A woman uncovers some unsettling truths about her country and its history in this drama from Spain. Lola (Ariadna Gil) is a writer who feels creatively stifled and hasn't been able to work out a new idea in months. Looking for something to clear her creative block, She takes an assignment to write a piece about Rafael Sanchez Mazas (Ramon Fontsere), a writer who sided with the fascists during the Spanish Civil War. While legend has it Mazas was killed by Republican troops, the truth is he was given protection and shelter by Friends of the Forest, a group of men who lived in the woods. As Lola tries to search out Joaquim Figueras, one of the last surviving Friends of the Forest, she discovers a soldier who captured Mazas and was prepared to shoot him, but opted to let him go at the last moment. As Lola's writer's block dissolves, she digs deeper in search of the truth about this elusive man and his mysterious actions during the war. Soldados de Salamina was based on a true story and the real-life Joaquim Figueras appears in the film, along with several other people who took part in the shelter and capture of Mazas.

It is a poignant story of loss, emotional withdrawal and, finally of getting on with life.

There are no featured audience reviews yet. Click the link below to see what others say about Soldados de Salamina!