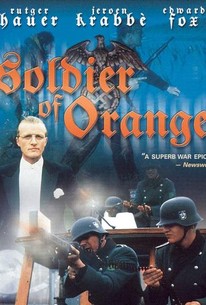 With this fact-based World War II drama and the equally memorable The Fourth Man (1983), Dutch director Paul Verhoeven gained an international following, eventually translating his reputation into Hollywood fame as the director of bloody science fiction spectacles and prurient sex thrillers. Rutger Hauer stars as Erik Lanshof, an aristocratic Dutch student, one of six carefree friends who don't care much for politics. When the Nazis invade Holland, however, the group is drawn inevitably into the conflict. While Alex (Derek de Lint) joins the German army, the suave Gus (Jeroen Krabbe) becomes a resistance leader, eventually escaping with Erik to England, where they become pawns in a much larger underground movement to restore their country's Queen Wilhelmina (Andrea Domburg) to her rightful throne. Based on an autobiographical novel by Erik Hazelhoff Roelfzema, Soldaat van Oranje (1978) also features early work by another Dutch master who went on to success as a director of big budget Hollywood films, cinematographer Jan De Bont.

Peter Faber
as Will

Soldier of Orange is a movie made by filmmakers whose war experiences were created from watching films and reading books. They can't pass off their second generation insights with the guts and glory of the men who fought the fight.

"Soldier of Orange" may not be great art but it's a good yarn. And the combined effects of Mr. Verhoeven's comfortingly old-fashioned storytelling and Mr. Hauer's unexpectedly brittle performance keep it moving at a fast clip.

Powerful stuff from back when Paul Verhoeven made good movies.

Soldier of Orange offers an involving look at the horrors of war.

A work chronicling the Dutch fight in WWll against the Nazis. What fight, you say? True indeed, there wasn't much of one, and so Verhoeven's film recounts, but in a sort of warm fuzzy way. What you get then is sort of the Dutch equivalent to American propanganda films, but with some little sex thrown in to spice up what ain't much of an action tale. The piece looks good though. If you're Dutch, or know someone who is, then it's probably worth another star.

For sake of comparison to the Black Book and only,Soldier of Orange is one of the primary illusions of the WWII aristocratic prosperity,a feast of irony and nostalgia amongst the company of friends in the beginning,dementia and agony in the end.Krabbe's performance crushes Pianists and juvenile Readers.Placed in 1977 greatest films.