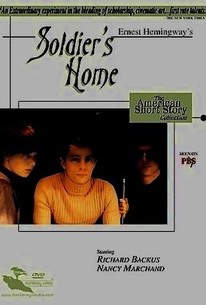 The 44-minute Soldier's Home is based on a story by Ernest Hemingway. Richard Backus stars as a returning World War I veteran who can't adapt to the changes in his home town. Nancy Marchand, Mark LaMura and Lane Binkley costar. Though released separately on videocassette, Soldier's Home was originally telecast on PBS' American Short Story series in tandem with another short drama: Almos' a Man, based on a Richard Wright story and starring LeVar Burton and Madge Sinclair. The two playlets initially aired on April 25, 1977.

There are no critic reviews yet for Soldier's Home. Keep checking Rotten Tomatoes for updates!

There are no featured reviews for Soldier's Home at this time.