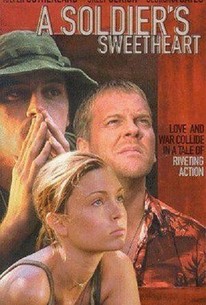 Thomas Michael Donnelly directed this Vietnam drama, filmed in New Zealand and adapted from Tim O'Brien's short story, "Sweetheart of the Song Tra Bong," about a group of army medics in Vietnam. Rat (Kiefer Sutherland) narrates the tale seen in flashbacks: Rat's buddy Fossie (Skeet Ulrich), after learning about a unit that pooled money to bring in a hooker, manipulates the black-market to import his hometown girlfriend, innocent teen Marianne (Georgina Cates). The M*A*S*H-like unit is pleased by her presence, but Marianne finds the war carnage fascinating; she experiments with small-arms fire, goes wandering off into dangerous territory, and becomes friends with a unit of Green Berets, much to the dismay of Fossie. Just when he's on the brink of sending her home, she sets forth on an all-night patrol with the Green Berets. This film and Donnelly's The Garden of Redemption, another war drama, are two/thirds of a planned Showtime trilogy. Locations in New Zealand. Shown at the 1998 Seattle Film Festival.

Critic Reviews for A Soldier's Sweetheart

There are no critic reviews yet for A Soldier's Sweetheart. Keep checking Rotten Tomatoes for updates!

Audience Reviews for A Soldier's Sweetheart

Great movie! Despite the irony of the story plot, Georgina Cates truly shines in this film.