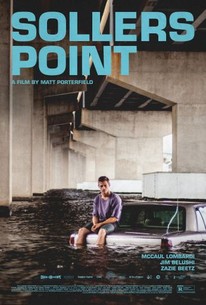 SOLLERS POINT tells the story of Keith (McCaul Lombardi), a twenty-four-year-old newly released from prison and living with his father (Jim Belushi) under house arrest in Baltimore. Keith is struggling to reestablish himself, and break free of the bonds forged behind bars, within a community scarred by unemployment, neglect, and deeply entrenched segregation. His intentions are in the right place and he possesses an aggressive desire to get back on his feet, but as he taps into all his familiar resources, he finds that he may be reverting to his old ways.

Jim Belushi is superb in the small role of Keith's father, a man admired and respected by everyone but the one individual he loves more than all the others combined.

The screenplay is naturalistic and the lead actor holds attention, but the film is too long and inconsequential to make much of a lasting impact as Keith meanders through his daily routines.

What "Sollers Point" accomplishes is a singular balancing act, compensating for the mood of heavy discouragement with only the slenderest thread of hope.

Characters like this one can be infuriating. But Mr. Lombardi imbues Keith with an ordinary likability...

The loose, seemingly improvisational performances bolster the film's unstudied realism and surface the hope and despair of the characters.

A despairing slice-of-life drama set in the blue-collar suburb of Baltimore.

What is striking is that, the more the action is delineated, the sadder the film becomes, because none of it is good for Keith. Anything remotely eventful only drives him further and further backwards.

Rather than conjuring sympathy for our protagonist, the film wallows in his rut.

We engage with the characters but don't necessarily align ourselves with any of them. We observe in a non-judgmental fashion.

Porterfield, who hails from Baltimore himself, extracts convincing emotions from the simplest scenes, pursuing the understated rather than the boisterous.

Though the ending may be a touch off-footed, and some performances range from the cliched to the monotonous, the majority of the film captures a rather unique (and realistic) concern that affects numerous Americans today.

Matthew Roe
Under the Radar
View All Critic Reviews (27)

There are no featured audience reviews yet. Click the link below to see what others say about Sollers Point!