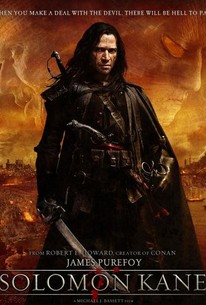 Critics Consensus: Solomon Kane's formulaic and bleak narrative is overcome by an entertaining, straightforward adherence to its genre, exciting gore, and a gratifying lead performance by James Purefoy.

Critics Consensus: Solomon Kane's formulaic and bleak narrative is overcome by an entertaining, straightforward adherence to its genre, exciting gore, and a gratifying lead performance by James Purefoy.

Critic Consensus: Solomon Kane's formulaic and bleak narrative is overcome by an entertaining, straightforward adherence to its genre, exciting gore, and a gratifying lead performance by James Purefoy.

Captain Solomon Kane is a brutally efficient 16th Century killing machine. Armed with his signature pistols, cutlass and rapier, he and his men unleash their bloodlust as they fight for England in war after war on all continents. As the story opens, Kane and his band of pillagers are carving a bloody path through hordes of defenders in an exotic city in northern Africa. But, when Kane decides to attack a mysterious nearby castle to plunder its rumored riches, his mission takes a fateful turn. One by one, Kane's men are picked off by demonic creatures until he alone is left to face the Devil's own Reaper -- dispatched from the depths of Hell to lay claim to his hopelessly corrupt soul. Though Kane at last manages to escape, he knows that he now must redeem himself by renouncing violence and devoting himself wholly to a life of peace and purity. -- (C) Official Site

Isabel Bassett
as The Witch

Mike McGuffie
as Another Raider

Amy Huck
as Prisoner
View All

Few characters have much to do but grunt and scream and bleed.

Been there, done that.

"Solomon Kane" succeeds by embracing its identity as a straightforward genre exercise, complete with bone-crunching and blood-spurting action. By not aiming for more, it hits its target.

Who knew there were skinhead and zombie equivalents in late-Elizabethan England?

It's hardly original (and Max von Sydow is wasted in brief scenes as Kane's father), but "Solomon Kane" is worthy of big-screen appreciation.

Mr. Basset is too enamored of the usual action film clichés ... But he has a graphic visual style that suits the simplistic material and he keeps you watching even as the wet, sucking sounds of skewered flesh grows tedious.

...action is ferocious and bloody, but light on CGI...the film looks spectacular without over-doing the fantasy worlds...

All the positive qualities are wasted on the overdramatic twist of the commonplace antihero who must reluctantly return to the darkness of his past.

A film like this should be fun and you should really want to root for the hero. But Kane is so ... well, boring. Predictable. And honestly, a bit of a whiner.

It amalgamates action, drama, horror and fantasy into a unique hybrid that thrives on all parts at once, while not betraying the core of Howard's original character.

Bassett brings to the screen Solomon Kane...with all due seriousness and gravity, as apparently befits the character.

It started out with some promise, with decent performance by Peter Postlethwaite (I hope for posterity, this wasn't his last film!), but it devolved into an incomprehensible slurry at the end with bigger holes in the plot than had the Titanic. The costumes and special effects were commendable -- but what really was the point of it all?

Decent mystery adventure film based on old pulp novels that lives off its really great locations and set pieces that look and feel real, making for a great gloomy medieval atmosphere. Even though the characters remain somewhat one-dimensional and the showdown is rather short, the film does never fail to entertain.

A murderous pirate renounces his evil ways in the hope of saving his soul from damnation but is drawn back to his violent ways when an evil sorcerer's army invades the land. Solomon Kane reminded me of a Hammer Studios period chiller done in the style of The Lord Of The Rings. The medieval setting and religious imagery of something like The Witchfinder General combine with some bloody, rain and mud soaked battle sequences to create a believably grimy world of superstition and violence that makes a nice backdrop to James Purefoy's intense central performance and it's this grittiness that makes it stand out from the never-ending crowd of Hollywood style comic strip action films. Unfortunately and almost inevitably, the script lets the side down; this is the third fantasy inspired action film I've seen this week, and the third that includes a plot revolving around a tough, amoral warrior that faces his nemesis to rescue a kidnapped damsel in distress. How original. And anyone who fails to guess the identity of the masked villain would have to be a paste eater on a Ralph Wiggum level. The cheesy CGI monsters tacked on to the beginning and end of this otherwise brutally realistic hack and slasher clearly compromise its vision and it's a shame that film makers today feel the need to play to the cheap seats in this way, every single time. Still, thanks to some strong performances and quality production design, it's easily the best of the three.

Solomon Kane is a literary creation from the legendary Robert E. Howard (1906-1936), who was also the creator of Conan the Barbarian and the father of modern heroic fantasy.I've been waiting on this film for a while and I finally got my hands on the dvd from overseas since the film has not got a U.S. release date as of this writing and I have to say this film ended up being a very entertaining film with very good action scenes and a well written screenplay which constructed the main character on a quite interesting way. Director Michael J. Bassett has only two other movies in his filmography (the modest but excellent war horror film Deathwatch; and Wilderness, which I have not seen), and the idea of putting him in front of an ambitious multi-national co-production may sounded risky, but the truth is that he made a very solid work in Solomon Kane.As for the screenplay (which was written also by Bassett), I appreciated the fact that it did not try to "modernize" the story; it would have been easier (and more economic) to move the story to modern times, but if the film had done that, it would have lost the heroic "taste" from the main character, as well as the historical content from Howard's tales, and his almost academic examination of the social contrasts during the puritan period in England.However, I cannot deny that the classic conflict between God and Satan, along with the many Christian references, could be interpreted as simple religious propaganda nowadays. James Purefoy was excellent in the titular role. Frankly speaking, I had little faith in a lesser-known actor playing a titular role, but James proved everybody wrong. He was like the shining armor for the movie. Others, even though little-known, played their part decently enough to leave any bad impression. "Solomon Kane" strength is clearly its stylish direction, taut storyline, fine character development, ample sword play, and adequate running time. Kudos to the Director Michael Bassett, who gives the movie a very stylish look. The camera-work, slow-motion sequence, action choreography added great depth to the movie. Giving scope for character development is very important and it was properly showcased. The movie derides itself a bit in the ending. Like most action movies, the ending is reduced to One-Versus-All fight, giving a little unrealistic feel. Also, the ending came a little too fast. Meaning, the So-Called-Very-Bad-Guys were overpowered quite quickly and easily by the protagonist. Having said that, this movie is far better than most movies in the similar category. Overall, "Solomon Kane" is a very good movie that will hopefully find a U.S. release date one day.