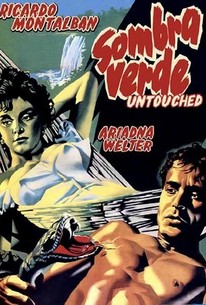 Taking a brief respite from his Hollywood career, Ricardo Montalban essays a role in his native language in the Mexican Sombra Verde (Green Shadow). Montalban plays an adventurous young chemist who goes on a scientific expedition in the tropical regions of Vera Cruz. After battling all sorts of natural enemies, Montalban comes face to face with a human foe, fugitive-from-justice Victor Parra. The two men come to blows when our hero falls in love with Parra's provocatively garbed daughter Ariadna Welter. Incidentally, the film's leading lady was the sister of actress Linda Christian, then the wife of Tyrone Power. ~ Hal Erickson, Rovi

We long for the plot not to have focused on [Don Ignacio Santos] rather than that of Federico. [Full review in Spanish]

There are no featured reviews for Sombra Verde (Untouched) at this time.