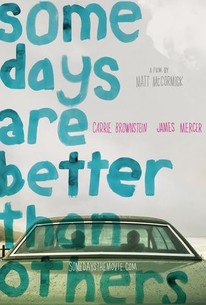 Some Days Are Better Than Others Photos

"Why do the good times go by so fast while the difficult times always seem so sticky?" Some Days are Better Than Others is Matt McCormick's poetic, character-driven debut feature-length film that asks why the good times slip by so fast while the difficult times seem so sticky. The film explores ideas of abundance, emptiness, human connection and abandonment while observing an interweaving web of awkward characters who maintain hope by inventing their own forms of communication and self-fulfillment. Katrina (Carrie Brownstein) is a twenty-something reality TV enthusiast, video diarist and animal shelter worker whose world falls apart when she finds that those important to her are often not what she hopes they would be. Eli (James Mercer) is a mid-30s slacker who could offer a thoroughly researched social critique explaining all the reasons why he shouldn't get a job; his experiences temping only reinforce his assertions. Camille (Renee Roman Nose) is a socially handicapped thrift store attendant who spends her days sorting through the donated discards of other people's lives, and Otis (David Wodehouse) is an 84-year-old eccentric filmmaker and inventor who strives to be recognized for his work. Some Days are Better Than Others is about the nuances of communication, the desperation of heartbreak, and the struggle to maintain hope through the passing of time. It's a sad valentine to the forgotten discards of a throwaway society, and a story about knowing when to hold on, and when to let go. -- (C) Official Site

Todd A. Robinson
View All

News & Interviews for Some Days Are Better Than Others

View All Some Days Are Better Than Others News

Critic Reviews for Some Days Are Better Than Others

Sort of a neutered Todd Solondz comedy. No sperm shots, murders, or pedophilia. Just lonely people trying to reach out now and then to each other, plus numerous shots of the sun's rays reacting on soap bubbles.

Like the characters, the three stories show only the most tentative signs of going anywhere.

Some Days unspools in a depressive deadpan that might be more effective were the characters' plights not so clearly of their own making.

Although this always interesting film doesn't quite come together at the end - it couldn't decide exactly what it wanted to say - McCormick has done a lot of things right.

If you want to draw the line between a quiet, touching little movie and a wooden, deadly boring dud, you might want to see Portland director Matt McCormick's "Some Days Are Better Than Others," but I wouldn't recommend it.

The kind of American independent quirkfest that needs to be quarantined and examined, not valorized.

[Matt] McCormick's eye for the small things that change a day, or a life, is sharp and compassionate; he finds the moments that initially seem unremarkable and follows them until they gradually transform into something greater.

A sensitive and soulful film, populated by characters recognizably weighed down by both circumstance and a greater, free-floating ambivalence.

This movie throws in a healthy dose of "quirky" shots and montages as if they were required.

McCormick has translated song into cinema, where tone and feeling supersede plot and arc.

McCormick builds a delicate web connecting ordinary Portlanders who share loose, accidental narrative connections but are chiefly united by a wispy, dreamy texture of life and their common home...

Lonelyhearts going nowhere fill every corner of Matt McCormick's Some Days Are Better Than Others, a film that verges on a parody of American indie cliches.

Audience Reviews for Some Days Are Better Than Others

There are no featured audience reviews yet. Click the link below to see what others say about Some Days Are Better Than Others!

Some Days Are Better Than Others Quotes