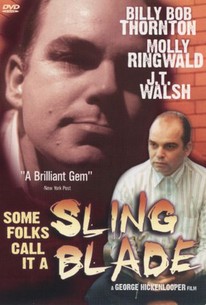 A disturbed man looks back at his past as he faces an uncertain future in this dramatic short subject. Teresa (Molly Ringwald), a young journalist, is sent on assignment to a state-run mental hospital, where she is to interview Karl Childers (Billy Bob Thornton), soon to be released after spending 25 years in the facility. While Jerry Woolrich (Jefferson Mays), the hospital's administrator, isn't sure that it's a good idea for Karl to be questioned by a young woman, he allows a compromise -- Teresa will be permitted to hear Karl tell the story of how he came to be committed, but she can't ask him questions. Teresa is then ushered into a dimly lit room, where Karl relates the harrowing tale of his miserable childhood and how, at the age of 13, he killed his mother and her lover with a kaiser blade. Star and screenwriter Billy Bob Thornton and director George Hickenlooper originally produced this short film in hopes of expanding the story into a full-length feature; the award-winning Sling Blade followed three years later, but by that time, Thornton had opted to direct the film himself.

Critic Reviews for Some Folks Call It a Sling Blade

There are no critic reviews yet for Some Folks Call It a Sling Blade. Keep checking Rotten Tomatoes for updates!

Audience Reviews for Some Folks Call It a Sling Blade

This short film stars Billy Bob Thorton, he is in a mental asylum and is having an interview the day before his release. I was worried that the talkative man would be picked to get interviewed because he didn't seem crazy enough, this was a psycho though. In the interview you expected to get shocked, with all the build up behind it. Instead you got a shoulder shrug. They were comparing this man to Charles Manson but this one while crazy seemed fairly calm. It just lead to nothing.

I had expected this version to be much more amateur in it's basic state and yet the acting and storyline to that end point, was just as good as that in the feature length film, with both Billy Bob and JT Walsh giving great performances.

It's unfair to really rate this as a movie since it's really just an extremely well made screen test. Billy Bob Thorton gave us a glimpse of the Karl that he would become and that alone is worthy of five stars. This reminds me a lot of the documentary "Titticut Follies", what with the chaotic background and incompetent nature of the institution. The monologue given in this is probably one of the all time greatest, it is method acting to the extreme.

This is a short film that sets up the character Karl for the movie Sling Blade. If you liked Sling Blade this will also be enjoyed.... but nothing to add to the top of your Netflix que!!

Some Folks Call It a Sling Blade Quotes