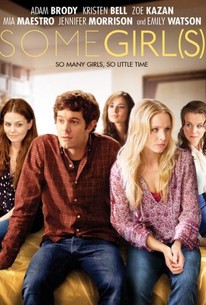 Rory Kelly (Sleep With Me) directed this romantic comedy-drama about love and infidelity. April (Juliette Lewis) warns insecure Claire (co-scripter Marissa Ribisi) about Chad (Jeremy Sisto), but Claire fails to heed her advice. April cheats on her steady, Neil (Michael Rapaport), sleeping with several men. Giovanni Ribisi portrays Claire's brother Jason. Director Kelly was honored with an award after Some Girl was shown in 1998 at the fourth L.A. Independent Film Festival, an event that rose in admissions from 12,000 to 21,000 that year.

Critic Reviews for Some Girl

There are no critic reviews yet for Some Girl. Keep checking Rotten Tomatoes for updates!

Audience Reviews for Some Girl

Decent romance/comedy-drama with some good performances.

Hmmm...I've rated this before..oh well. One of my all-time favorites!! Fantastic story plot that centralizes around a group of friends finding their ways in, and out, of love and relationships. Their shared stories give interests and aspects for one another to avoid in their own, but it is trust that appears to be lacking quite a deal. Filled with sense of humor that has you intrigued. Great performance by Marissa Ribisi. Amazing cast-Juliette Lewis, Michael Rappaport, Giovanni Ribisi, and Jeremy Sisto. Definitely worthy.