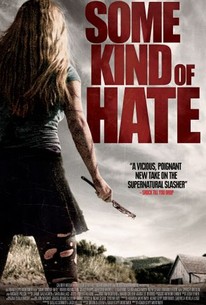 Some Kind of Hate Videos

Some Kind of Hate Photos

Relentless bullying has turned Lincoln's life into a nightmare. But he soon learns the true meaning of terror when he is sent to a remote school for troubled teens and the harassments start all over again. Only this time, someone is watching - a teenage girl named Moira who was driven to suicide by vicious bullying years ago. When Lincoln accidentally summons Moira from the grave, he unleashes a vengeful and unstoppable force on a mission of blood-soaked revenge.

Brittany Riley
as Student
View All

News & Interviews for Some Kind of Hate

On DVD This Week: Inside Out, Doctor Who, Vacation, and More
Black Mass Is Certified Fresh

View All Some Kind of Hate News

Critic Reviews for Some Kind of Hate

The message here is clear: Bullies are bad and so are razor-wielding ghosts. Almost as bad as this movie.

"Some Kind of Hate" succeeds at being discomfiting, and Mr. Rubinstein's role is played well, but the film, directed by Adam Egypt Mortimer, simply does not cohere.

"Some Kind of Hate" is some kind of mess.

Like so much teen-targeting modern horror, it opts for dull angsty brooding over the very sort of grim-and-gruesome sleaziness that might have made its premise interesting.

While the scares and gore is on the lower end, the blood is plentiful and satisfying which makes the film a more successful revenge movie than a horror one.

Some Kind Of Hate seems like it has something important to say but then doesn't really say much of anything at all.

It's not hugely ambitious or even original, but it succeeds in all that it attempts.

As a feature debutante, Mortimer presents a confident grasp of the genre, and Some Kind Of Hate bristles with the kind of energy that makes you sit up and take notice.

It is easier to admire "Some Kind of Hate" for what it is trying to do rather than for what it ultimately achieves.

A top notch horror effort, and a striking drama.

The title might accurately describe the reaction of most moviegoers to this lurid mix of ultraviolent revenge fantasy and supernatural thriller.

Audience Reviews for Some Kind of Hate

A movie that makes waste of its legitimately interesting concept with uninteresting and dull character development and terrible acting. Ronen Rubinstein's character is every emo kid you've ever seen, brooding, full of angst. There might have been a great character deep down, but the writing and the acting left a lot to be desired. Ronen Rubinstein's performance is, honestly, really wooden and bland. There are times when he's angry and telling Moira, who we'll get to later as I have some harsh things to say about her, where he comes across as such a whiny little bitch. The film definitely has something to say about bullying, but it's not exactly subtle. We all know bullying is bad, bullies should get what's coming to them, etc, etc. The film adds nothing new and, in some ways, there's nothing wrong with that, because, to me, it can still be satisfying in execution when you do see someone who's a bully get their comeuppance, it doesn't have to be subversive or complex. Just have the bullies die gruesome deaths and it'll be satisfying. But the film doesn't even accomplish that. The film is certainly bloody and gory enough, literally everybody, except one person, ends up dead, but there's no real sense of satisfaction when you see the assholes die. I don't know why, but there's just nothing there. And now we move on to Moira, the ghost who haunts the reform school and, somehow, is able to make people slash their own throats if she does it to herself. This is never explained and it's not like she's even a ghost, she seems like a physical being as people can actually interact with her. I don't have a problem with that. The problem comes in the fact that the actress who plays Moira, Sierra McCormick, is just absolutely fucking dreadful. I know I said that Ronen Rubinstein wasn't good, but Sierra is just completely terrible in this movie and she actively drags the movie down with her horrifyingly bad performance here. She's terrible and the character is fucking annoying to the point that you really do not want to see her anymore. And the thing is, I'm sure, that the film meant for her to be someone that you sympathized with since Moira is a victim of bullying herself. That bullying led to her suicide, at least I think it did. I don't think they ever made it clear. They probably did, but I just didn't pay any attention to it. That's what is most likely honestly. But I digress, Sierra, who was on a Disney Channel television series, ANT Farm according to Wikipedia, is awful in a way that just drags the entire movie down. There are scenes near the climax where she's angry and/or crying and she raises her voice, oh my god. It's so fucking bad. Easily one of the worst performances I've seen this year and I'm not even exaggerating about that, it's truly awful. It's not like the rest of the film was good either way, but Sierra's acting is a hindrance to the overall story they are trying to tell. And, sadly, no amount of blood and violence will make up for the fact that, deep down, this movie just isn't very good at all. In some ways this reminds me of Avenged, the one where the ghost of Native Indian possesses the body of a woman who's been raped and stabbed and they go on a killing spree to avenge what's been done to them by the same family, a vastly superior movie to this one, so why don't you watch that instead? This is a really bad movie.

An innovative film tackling the problem with bullying and teen suicide to the extreme. While I genuinely enjoyed its profound message, the acting and the plot were both silly to be taking seriously.

Some Kind of Hate Quotes