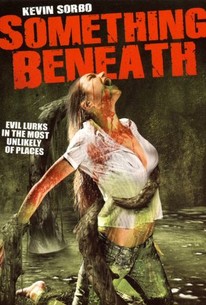 The attendees at an ecological conference have been noticing some disturbing changes in the local environment, and now in order to prevent an unprecedented catastrophe from spreading to the outside world, the event coordinator and a fearless priest will team to fight a powerful creature that could bring about the downfall of the human race. Somewhere out there, a slimy creature of unknown origins is transforming unsuspecting humans into rampaging monsters. The coordinator of the conference (Natalie Brown) is the only person who seems to realize the true scope of the threat, but in order to prevent the menace from spreading she'll need some serious help. Later, with a little help from a brave priest (Kevin Sorbo), the coordinator scrambles to evacuate the guests and eliminate the marshy menace once and for all.

Critic Reviews for Something Beneath

There are no critic reviews yet for Something Beneath. Keep checking Rotten Tomatoes for updates!

Audience Reviews for Something Beneath

There are no featured audience reviews yet. Click the link below to see what others say about Something Beneath!